The beautiful, small, Belgian town called Mons was 2015 one of the two European Capitals of Culture. As a part of their extensive program, they invited Charles Carcopino, a curator from France, and me for a residency. We decided to give a two week DIY workshop and to present the outcomes afterwards in a little exhibition for a wider audience to enjoy. Since I have been previously experimenting with pneumatics quite a bit (e.g. “Pneumatic Sponge Ball Accelerator”), I proposed that we could play with this theme in the workshop. The original idea was to investigate how to build a computer that uses air as a medium, but eventually we built various components, which were inspired by computers. Some of those components were also interconnected to a larger pneumatic machine and people could interact with this machine.

The exhibition with the control desk in the foreground. GIF by Prosthetic Knowledge.

Our approach to pneumatic computing

Building a computer that works with air sounds probably a bit weird – but at the same time the idea is not really so far off. There exist many types of pneumatic valves with logic properties and it should not be too complicated to construct entirely pneumatic systems which can perform logic operations and calculations – without the need for electricity. However, making a pneumatic “computer” out of such valves which runs an actual operating system like Windows 95 would be still quite a challenge, but that was also not the aim of the workshop. Instead, we wanted to explore how we could use air for building computer-like and computer-inspired components. We wanted to also see if we can connect some of the components in order to make a larger (or more complicated) pneumatic machine.

As workshop materials we used some industrial pneumatic components and lots of common, affordable objects which one can find in a regular mall: Balloons, camping and bicycle pumps, hair dryers, fans, flutes and whistles. On top of that I also brought some random stuff from my cellar – we tend to accumulate and recycle all sorts of things, so my basement is quite a DIY paradise.

Installation on the outside of the exhibition. GIF by Prosthetic Knowledge.

The setting of the workshop was brilliant, as the local school of architecture let us work in their exhibition space, which is a small chapel right in the city center. A short walk away from the chapel was also a pop-up Fablab, which had been set up as part of the Cultural Capital program. There we had access to a laser cutter and a 3D printer.

Big workshop action in the chapel. 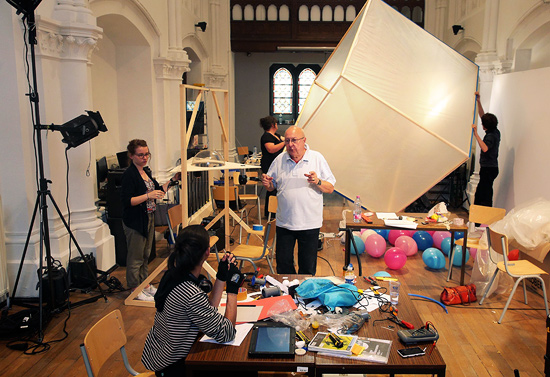 The workshop participants, who were recruited via an open call, were curious and diverse, ranging from a young law student to an elderly radio amateur and everyone else in between.

We never really managed to get everyone on one group photo. But thanks to my photoshop skills, I could make this collage. 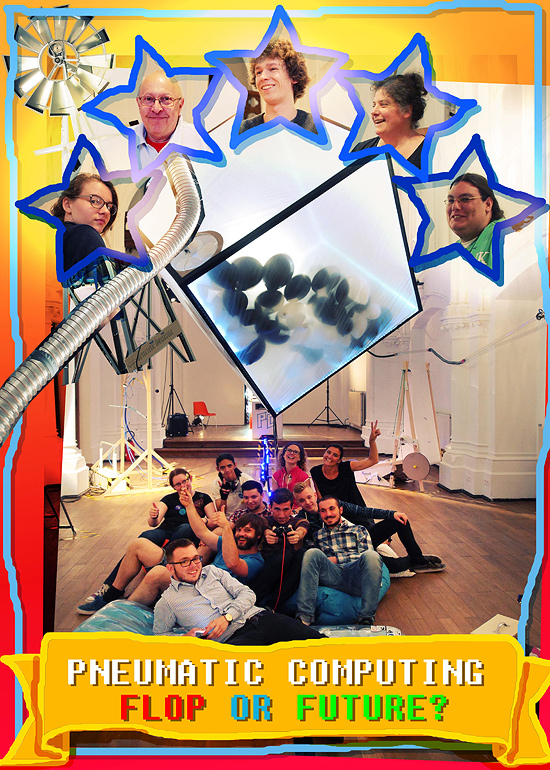 We started by making plenty of experiments. We explored the pneumatic properties of the different materials and tried to combine and connect them in unintended ways. There was a lot of adhesive tape wasted in a very short period of time. After two days, we had gained quite a bit of knowledge and a good understanding of what can be made with all the stuff. Based on these experiences, the first ideas for pneumatic computer components started to emerge.

Pierre-Philippe and Joëlle present their idea for a drawing pinball machine. 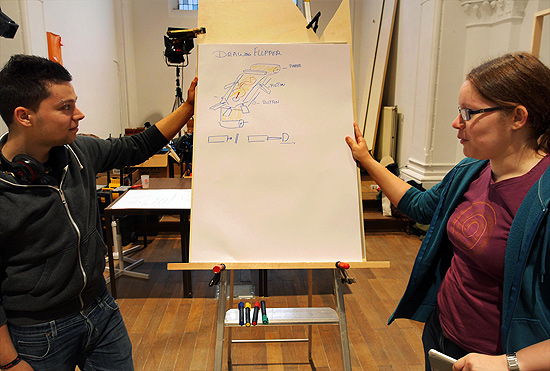 Christophe and Charles were the masterminds behind a 2*2*2 meter translucent cube, which hung from the ceiling and became our metaphorical pneumatic “CPU”. It was filled with black and white party balloons which represented the computer's 0s and 1s. Those balloon-Bits floated inside the cube, moved by the air streams coming from three large fans. The fans were connected to a control desk where the audience could turn each of them on and off and thus “program” the computer. This looked great, because there was also a bright lamp installed in the center of the CPU, which caused the balloons to cast shadows on the cube’s translucent surface. Those shadows were also picked up by a few light dependant resistors which produced random electric signals that we used to drive other installations.

Christophe is filling up the CPU cube with balloon-Bits. In the final version those became black and white balloons as Charles found that the installation would look more like “art”, then. 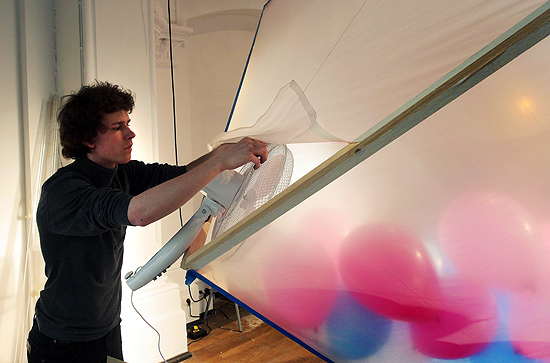 In the foreground is the control desk from which the CPU fans can be switched.

The balloon-Bits tended to explode from time to time. We couldn't get rid of this unpleasant side effect, so we decided to warn the visitors at least. 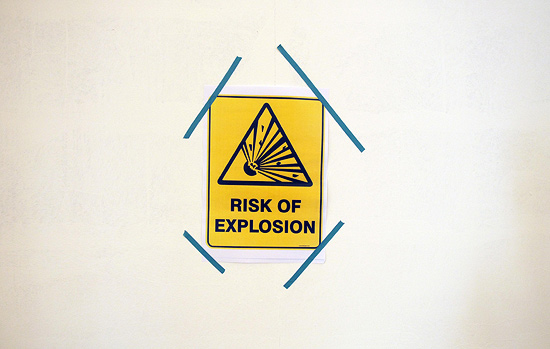 Two other teams had a common interest in building air powered drawing machines. They made a “printer” which was inspired by pinball machines. This was originally planned to be an independent installation, but in the process of drilling, making, thinking and talking, that plan changed and the printer’s electric valves were eventually connected to the CPU’s random balloon-Bit output.
The printhead was moved by pneumatic cylinders which were powered by a compressor inside the control desk.

Evelyne and Pierre‑Philippe are working on their pinball inspired printer. 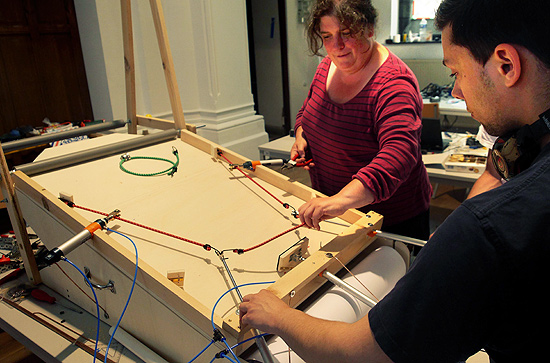 Close-up of the finished printer. 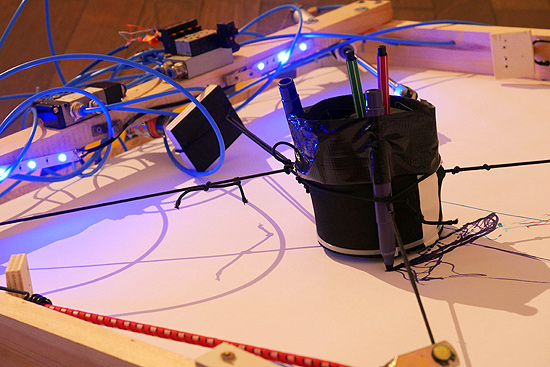 Behind the control desk hung a machine which was something in between a space themed videogame and a planetarium. It could be lowered manually so that visitors were able to put their heads inside it. Three hair dryers were elevating planets, built out of Styrofoam balls, which were floating around the observer's head. This didn't only give the spectator a very unique perspective on the installation – but also looked quite funny from the outside.

An amused visitor in Léa's planetarium. 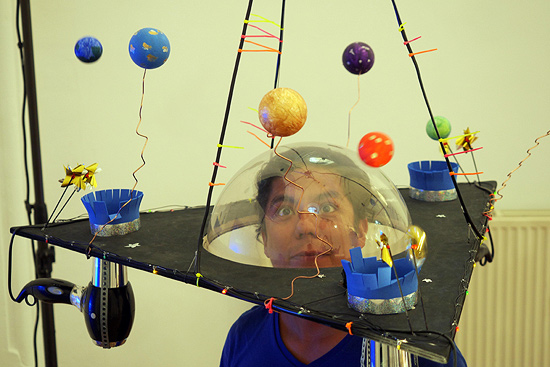 Isn't this rocket a lovely detail of the planetarium? 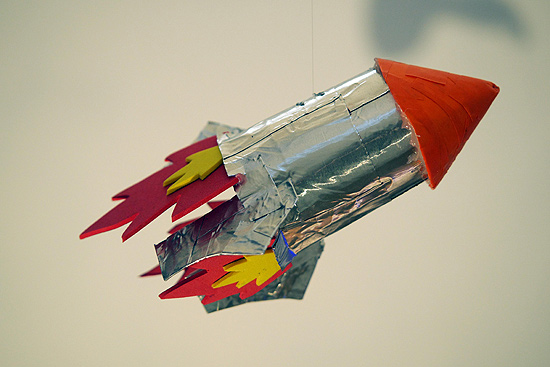 Another team was very excited about some of my leftover Pneumatic Sponge Ball Accelerator materials: Transparent plastic pipes, hoses and sponge balls. They wanted to make a welcoming installation in the entrance area of the chapel, which they eventually extended also to the facade in order to attract passers‑by. The installation consisted of long pneumatic track where balls travelled from the inside to the outside and back, driven by two modified hair dryers.
The whimsical movement of the balls attracted many curious people on the street. Thanks to this inviting installation, our exhibition became quite an audience hit, as a lot more visitors came than we expected!

Gil, Albert and Karim are mounting the pneumatic track on the facade. 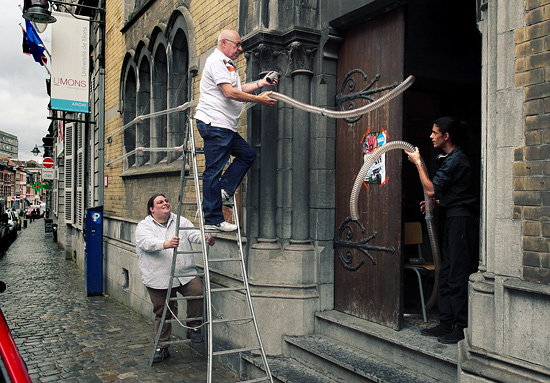 A decorative garden windmill became the base structure for the pneumatic welcoming machine. The blowers of two hairdryers were pushing the balls through the pipes back and forth. 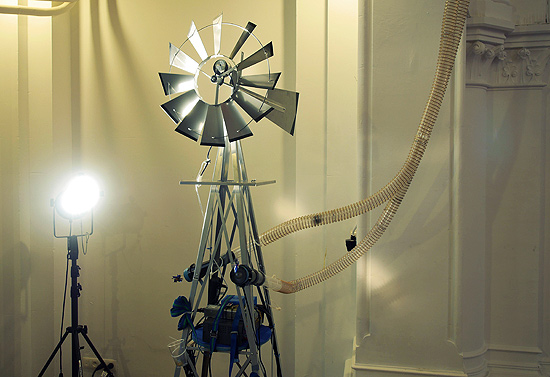 Of course, a modern computer needs a sound card as well, and if the computer works with air and is located in a church, then such a sound card might bear some resemblance to an organ. This idea resulted in another installation, which had a simple setup: Visitors could push pumps with their feet and sounds came out of all the flutes and whistles. Simplicity often pays off, and also in this case it turned out that the exhibition visitors enjoyed playing with this installation a lot.

Visitors loved to play with the organ of Alex, Alex and Valentin. 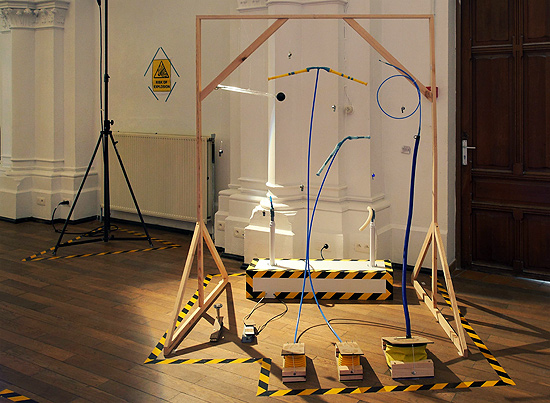 I also had an idea about how to combine the theme of computing with the flow of gases. There's a famous physics experiment, the Rubens' tube, where the frequency of soundwaves affect a row of flames. I tried to make a similar setup, but instead of flames, I was using little balls inside an array of plastic pipes.
The balls were driven by pressure waves coming from two large speakers, which were facing each other on one end of the contraption. The sound for the speakers was produced by a little game controller operated synthesizer, which I built extra for that purpose. The visitors could play with the synthesiser and subsequently make the balls move in different patterns, based on different frequencies.
This lead to a very interesting discussion with a visitor, who turned out to be an audio engineer. We were both speculating cluelessly how and why this setup works so well. We couldn’t solve the mystery entirely, but feel free to drop me an email in case you can explain what happened there.

When different frequencies are played on the speakers on the left side (there's a second speaker behind the visible one), the balls on the right side start to move up inside the plastic pipes. 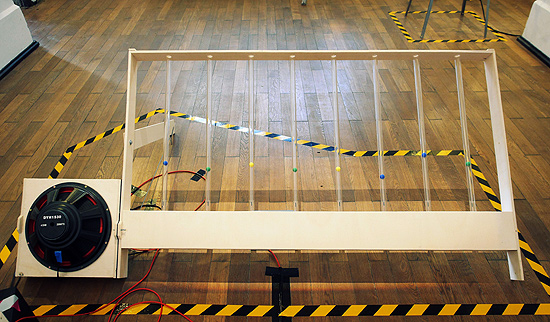 Kids are having fun with my rubber ball resonator. 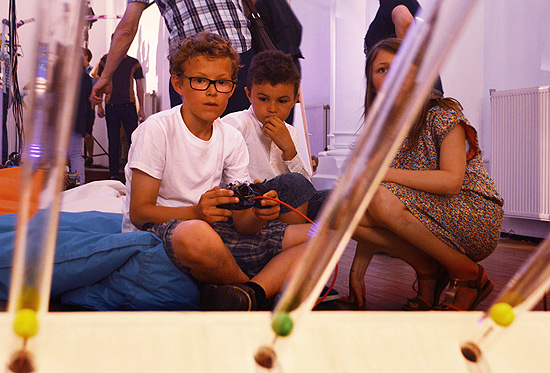 All in all, the workshop and the exhibition were great! Thanks to Léa Méresse, Christophe Van Hove, Karim Nait ‑Birrou, Joëlle Durant, Pierre ‑Philippe Coinu, Alexandre Demat, Valentin Demat, Alexandre Lopomo, Albert Heymann, Evelyne Vincent and Gil Van Cayseele for the energetic participation at the workshop and for making this such a wonderful experience!

Thanks to Charles for this super collaboration! And thanks to the people of Café  Europa (namely Laurence Beckers) and Mons2015 for organizing it so well. And also thanks to the Faculty of Architecture and Urban Planning of the University of Mons for trusting us and for letting us work in that wonderful space!