In collaboration with Kati Hyyppä, Berlin, 2013

The Rapid Robots workshop was part of the “Let’s Get Physical!” program of School of Machines, Making & Make-Believe, a summer school about coding and hardware tinkering, and it took place at Fablab Berlin. At the beginning we gave each participant a colorful gift bag, which contained three RC servos, a lollipop for good mood and a few robot-making essentials. The plan was to get physical with cutting knives and welding rods and to help everyone to build a moving robot during one week.

A group photo with all the robot constructors! 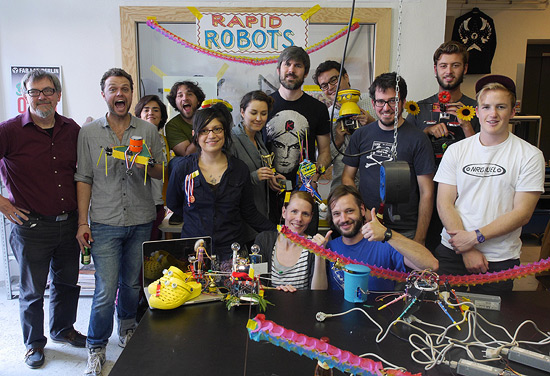 The first days of the workshop involved rigorous prototyping with the servos, cardboard, plastic pieces, clothes pins and loads of tape. Thorough material research was also done by exploring a pile of one Euro shop trash and treasures from our basement. It did not take long until fake Crocs and a miniature Barbie started to take the shape of a robot.

Kim Booth working on his robot “The Dumbbell”

Several incredible robots were made during the workshop week, all with their own character and twist. Some were marching determinedly forward with two legs, while others wiggled driven by sound or light. All the captivating creatures showed their smooth moves on the final day on a robot catwalk, and were awarded for their special features. Having as many award categories as there were robots – actually even one extra – guaranteed that everyone was left with a smile as the catwalk ended with a merry robot fight.

Thomas O'Reilly's “Draw Star” moves based on light and makes drawings, as its name suggests.

Big thanks to Rachel Uwa for inviting us, and to all the participants for the super nice collaborations and atmosphere!