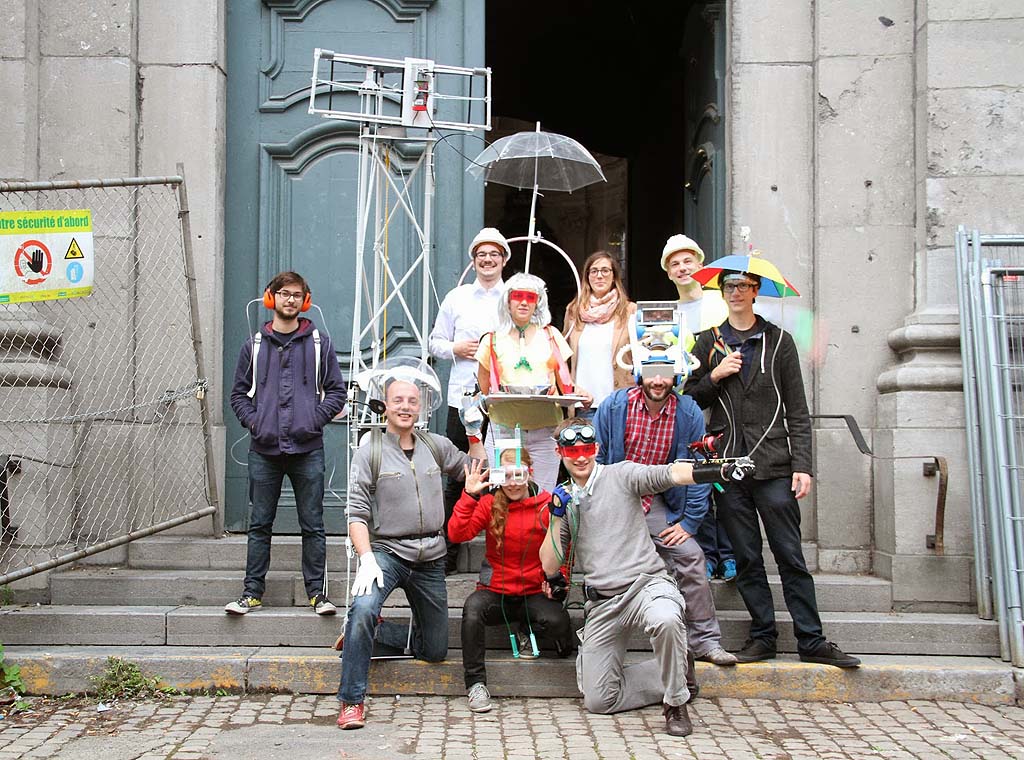 In collaboration with Kati Hyyppä, Namur, Belgium, 2013
“A cyborg, short for ‘cybernetic organism’, is a being with both organic and artificial parts.”
[ Wikipedia ]

KIKK invited Kati and me to give a workshop in Namur around the theme “Next Utopia”. We were free to make what we wanted, and decided that it would be cool to transform ourselves into cyborgs! The workshop space was also ideal for reaching the next level of human development: A Renaissance style, empty church full of divine iconography.

Regarding the cyborg building materials, we decided to leave computers and electronics out. Instead, we relied on post-apocalyptic plastic trash from one Euro shops, some medical gear and plenty of useful things from the hardware store around the corner:

Some of the materials that we used to transform ourselves into cyborgs.

We spread piles of the inspiring materials on the church floor, and the participants started to sketch their cyborg ideas. 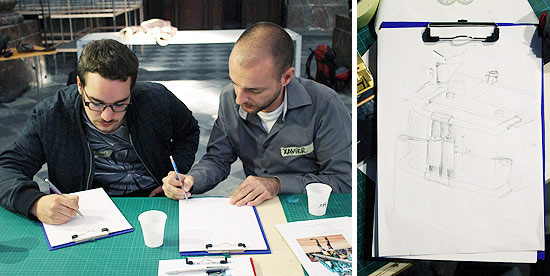 Soon after the first plans emerged, building began. Once again, hot glue and cordless drill proved to be tinkerer's best friends. Here we see Hugo working on his cyborg gear for surviving in a hostile environment: 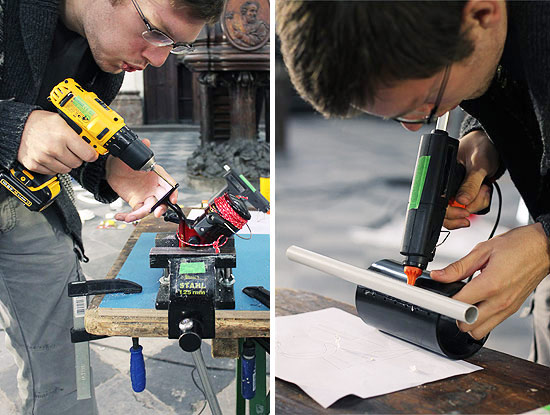 One of his wearable devices was shooting a magnet attached to a string. After shooting, he could use a crank from a fishing rod to pull objects caught with the magnet towards him. This could be useful, for instance, when shopping tomato cans in a supermarket. Already the first tests showed that the shooting worked well: 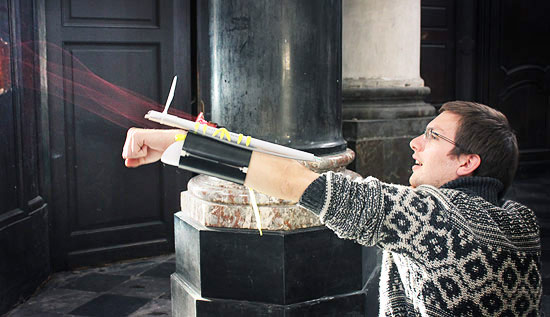 After three days of hard work, all parts of Hugo's rather complex construction were brought to perfection. Equipped with his new superpowers, he was now able to:

This impressed us a lot and we wish Hugo good luck – we strongly believe that he'll survive any challenging circumstances in the uncertain future!

The finished cyborg gear for surviving in a hostile environment

Drinking and liquids were also Camille's main inspiration when she decided to transform herself into a drink dispensing Bar-Borg! She built a glamorous wearable contraption with which others could play a special kind of roulette: Two modified ashtrays generated a random price for a random drink on the push of a button. Based on the results, she served the surprise drink directly out of the reservoirs inside her shiny backpack.

Below is the inside of the chrome mannequin backpack revealed: With the air pressure of two hand pumps, Camille could tap five different drinks. No need for thirsty throats on planet Next Utopia. 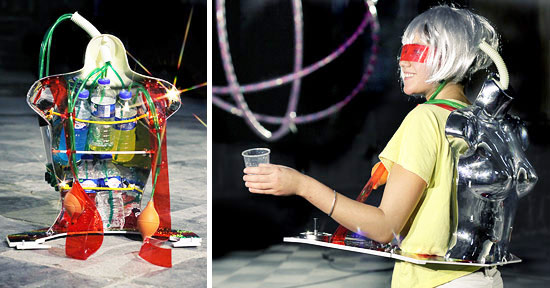 With a strong vision of an audiophile future, Yordi and Sam developed their sonic cyborg system. Powered by the walking steps of its host organism, the mechanical music machine produced stereophonic sounds. This instant symphony of random tones and rattles was transmitted from the backpack directly into the ears via a set of transparent hoses.

The sonic cyborg system in action

You can listen to a sound sample of this cyborg while watching the gif:

A graffiti painting exoskeleton was the fruit of Martin's and Xavier's hard work. Mostly built out of PVC pipes, this lightweight construction moved a spray can in 3.5m height on a rope controlled x-y plotter mechanism. Tagging up the hood in unreachable heights? No problem with this rig!

Details of the PVC pipe connections 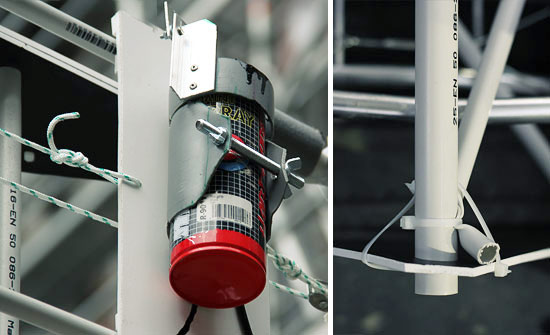 The simple technique of connecting the pipes with hot air and tie wraps was strongly inspired by Theo Jansen's Strandbeests (in this video you can see Jansen's tie wrap construction technique quite well). And as the result shows: Three days of sweating in the blazing breeze of the hot air gun paid certainly off for Xavier and Martin. 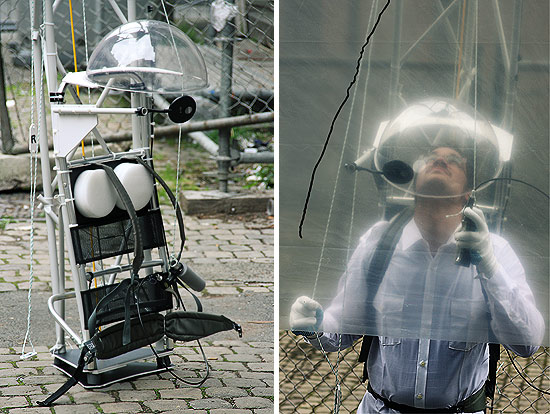 But Kati and me have also not been lazy! In preparation of the workshop, we built already two cyborg constructions in Berlin. Kati's personal rainbow generator was a combination of an umbrella hat and a garden sprayer. The only additional thing which was required was sunlight.

The personal rainbow generator in action

Here's the detailed material list of the rainbow generator: And I built a head level extender for myself:

Being one head taller with the head level extender

Here's what I used to build it: Thanks again to Marie du Chastel from KIKK for organizing this three days of awesome experience!

And we also thank the Fédération Wallonie-Bruxelles for generously funding this workshop, which was part of their Quinzaine Numérique.