In collaboration with Felix Fisgus & with contributions by many others

“Smart Fairy Tale” is a remote controlled story machine. A little red ball rolls through a maze of transparent pipes. Interrupting light barriers along its way, the ball triggers the movements of numerous animatronics. Different track switches inside the pipe system determine the path of the ball, leading to a variety of stories which are being told by the apparatus. Visitors can operate the installation via their smartphones.

Our home for two weeks in late Summer 2020: The “idea space” at the ground floor of Zaha Hadid's phantastic building

Phæno, a science center for which I already made a few exhibits (e.g. this giant pinball machine), invited Felix and me in late Summer to Wolfsburg. The plan was to build a story telling machine within two weeks, in an open process, which would also involve the public. The project was Phæno's contribution to Phaenomenale, a biennial festival about art and digital culture, which took place throughout the city of Wolfsburg at the end of September.

The machine before we installed it prominently in Phæno's window
And a little bit closer, because it looks so nice :)

Building with the public

We didn't just want to make an installation for the public, but also include the public in the creation of the machine. Therefore, we asked the citizens of Wolfsburg to donate building materials. Specifically we requested used and abandoned toys. This call turned out to be a big success, probably also because of the ongoing Covid-19 pandemic. Many people were cleaning up their households during the first lockdown and wanted to get rid of old things. We took everything happily, as long as it was playful!

Mareike is surrounded by a pile of donated toys 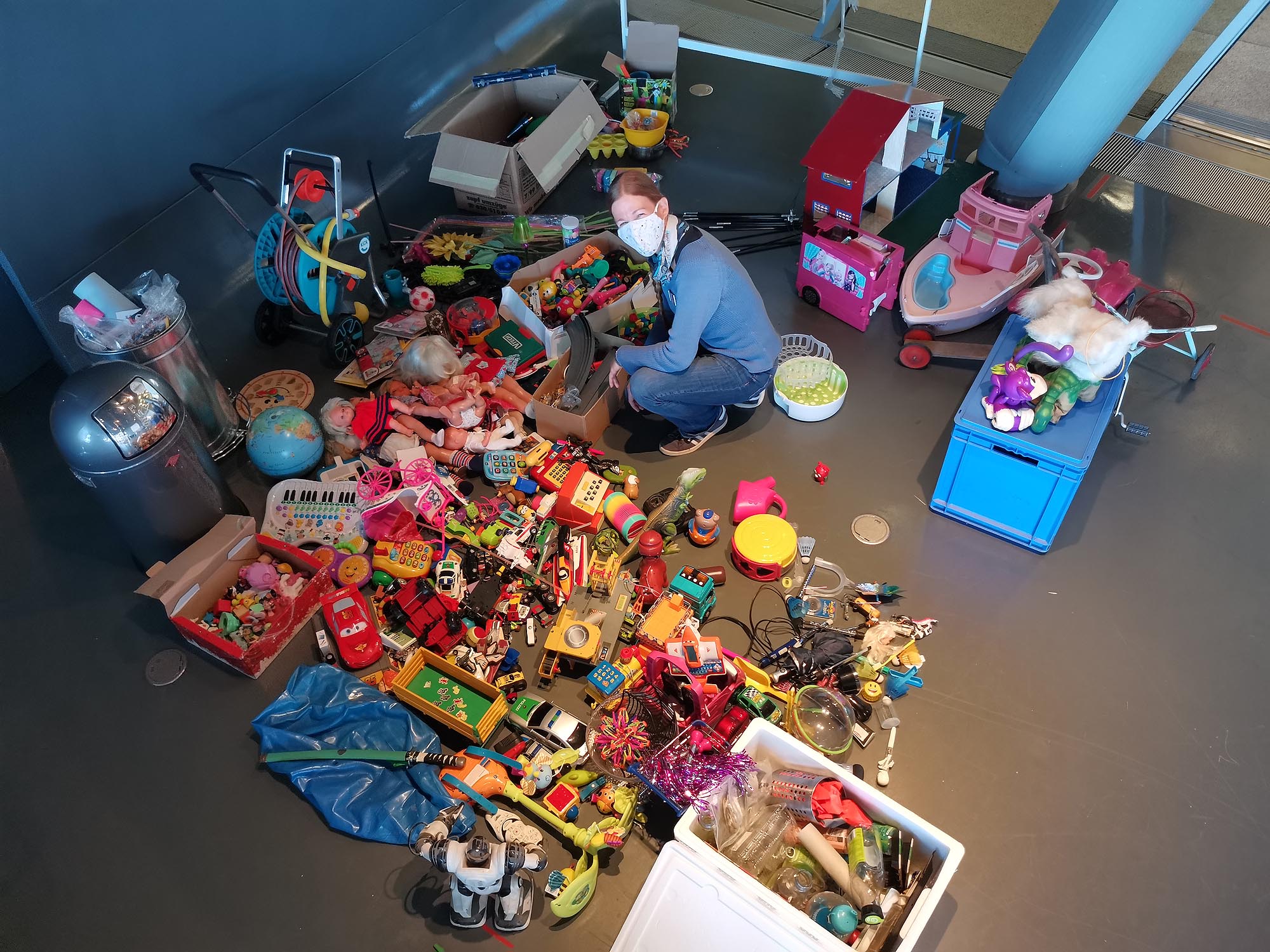 Having received such a variety of interesting toys from all eras, the educators of Phæno showed them to a few elementary school classes and asked the kids to draw different scenes with them.

Some inspiring drawings that the elementary school kids made for us 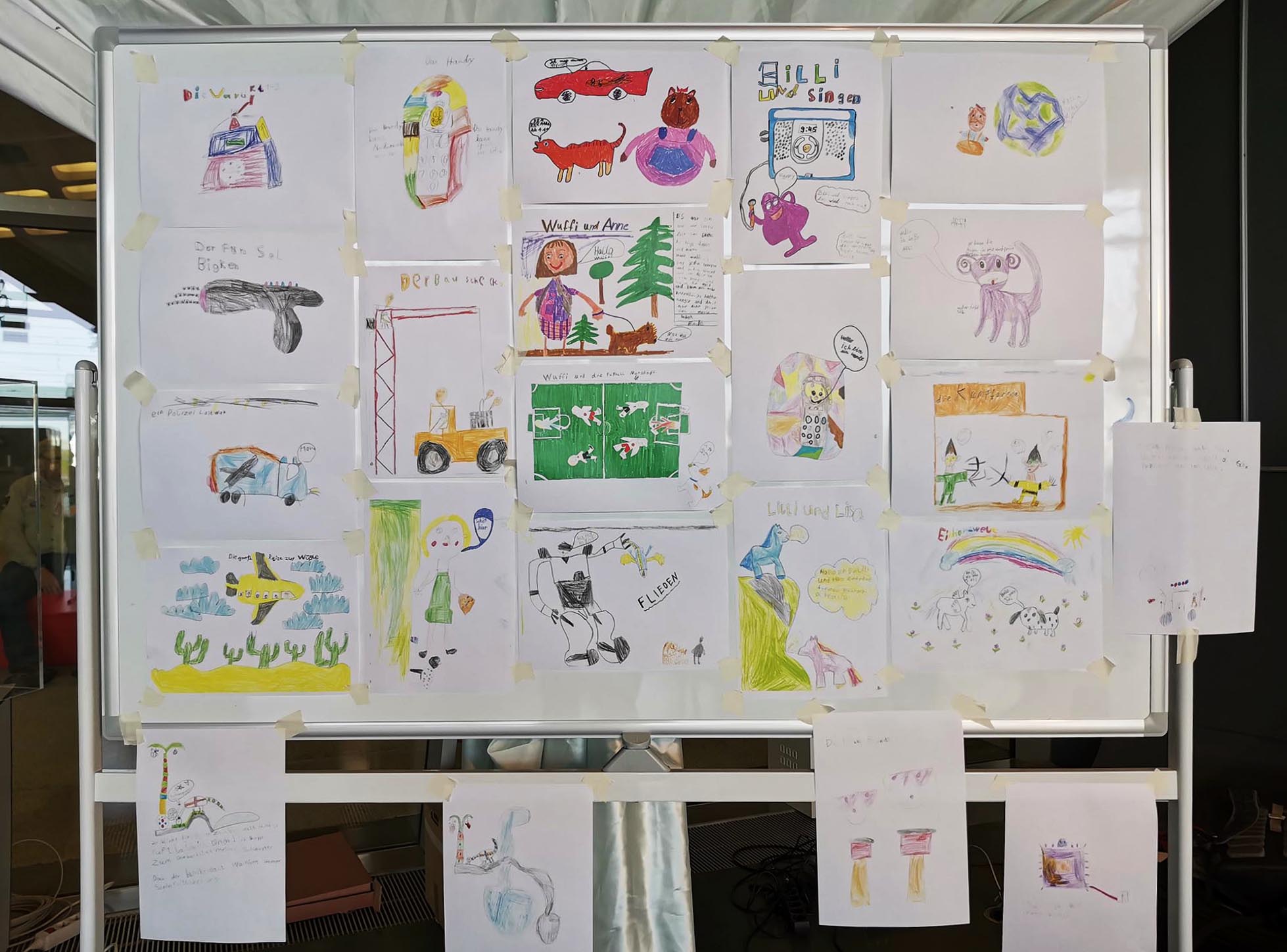 While the school kids invented all kinds of creative toy to toy interactions, Felix and I were busy building the marble machine. The red ball rolling through it would later become the story's red thread and trigger all the animated scenes. 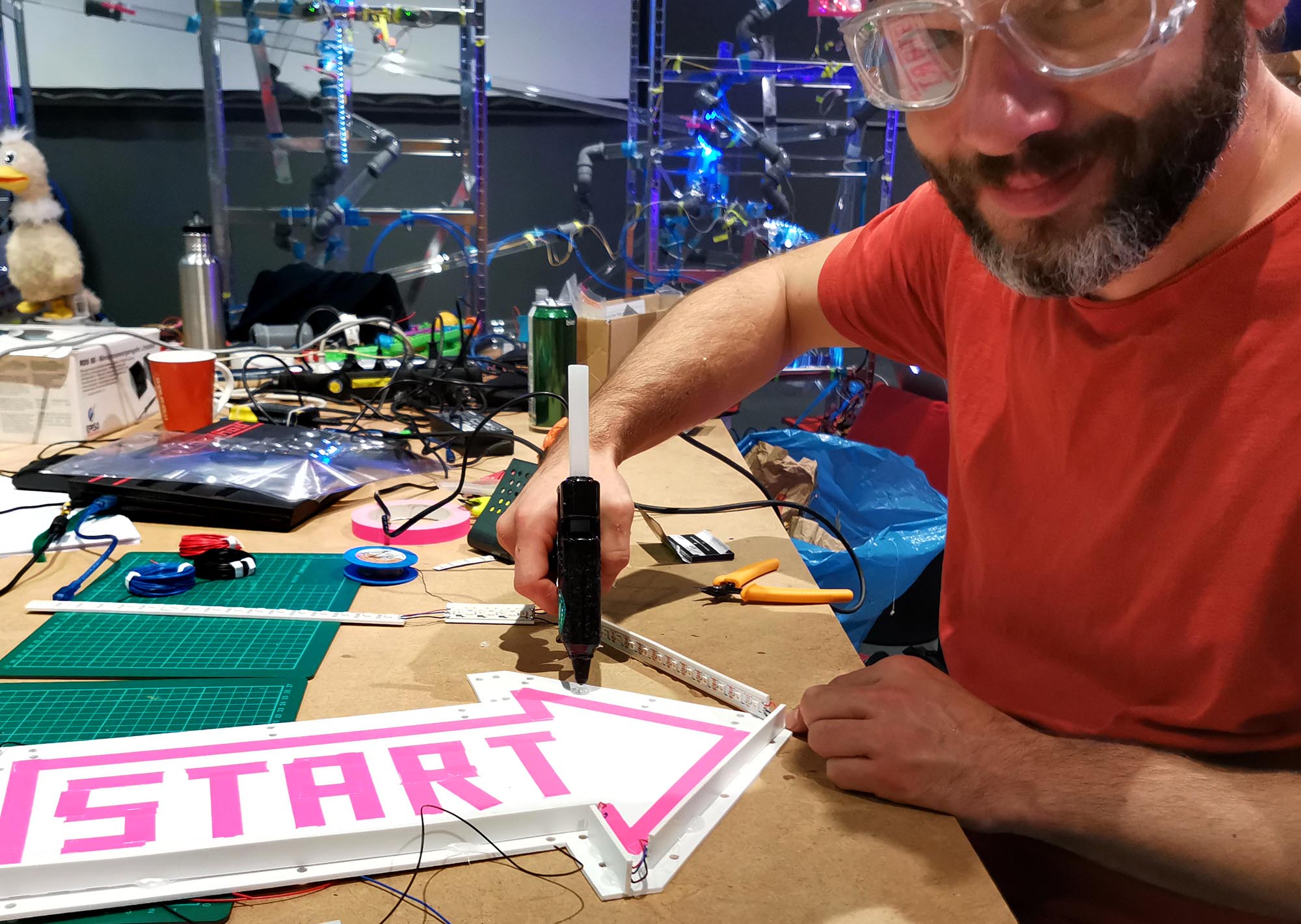 After one week, the structure of the machine was up and running. We could switch between paths via our smartphones and the automated ball lifts worked as well. The structure looked still kind of empty, but we were confident that this would change soon.

The marble machine story sequencer after one week of building 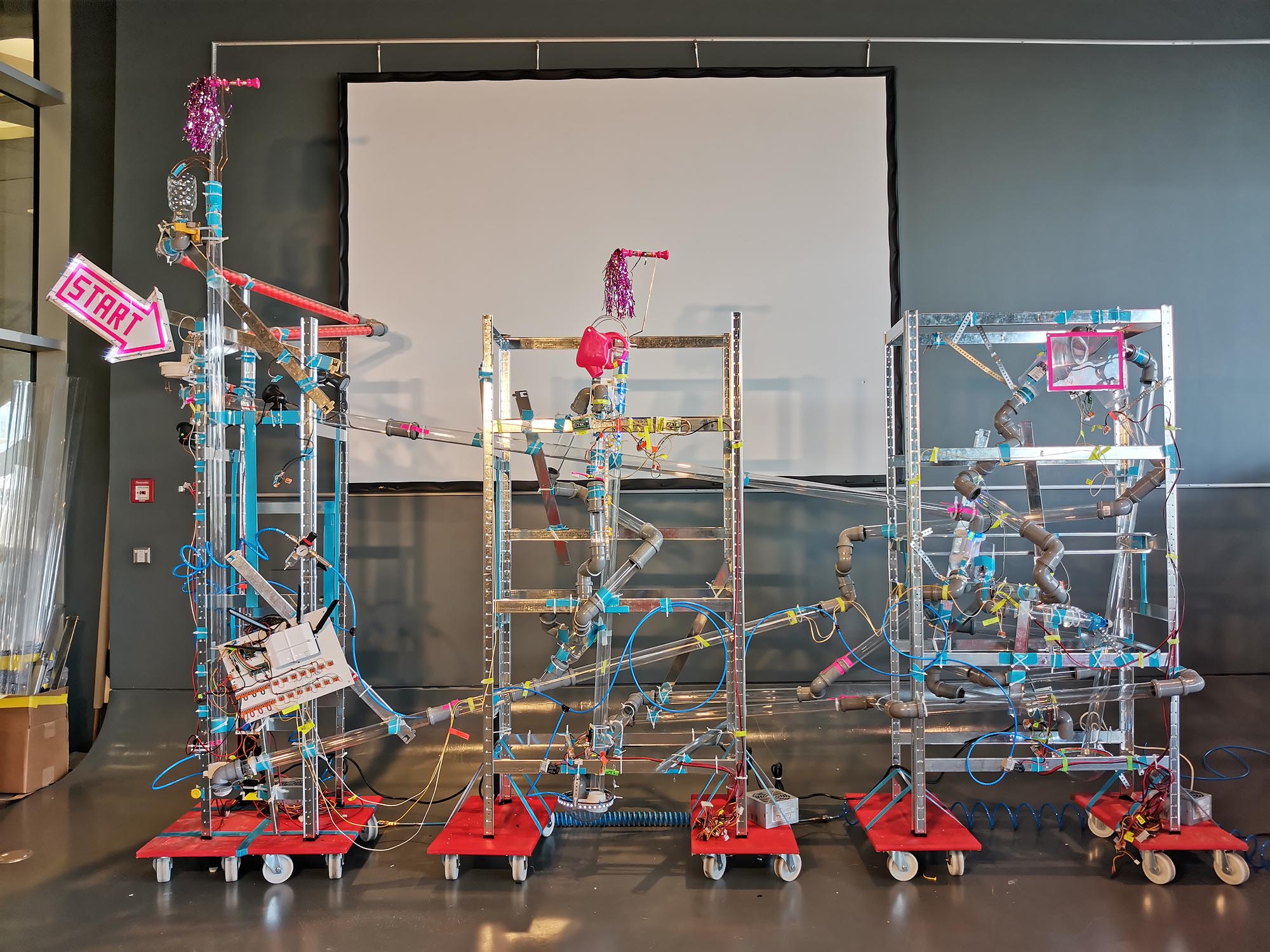 During the second week of building, we opened the doors of our workshop and invited others to help us make the animatronics. Most of our collaborators were high school students, but when 70 year old Wolfgang, an artist himself, showed up at the door, curiously asking if he could also participate, of course we said yes!

Felix and Wolfgang working on an animatronic involving a toy dinosaur

Thanks to the many creative drawings of the kids, it was easy for everyone to get inspired about what those toys could do, by adding a few servos, LED's and a microcontroller, or even just by powering them up in the right moment. The open workshop was not just about building, but also about sharing knowledge. We all had a fun time learning from each other about electronics and programming and together, we all gained understanding from experiments with various mechanical designs. After a few days, we had a stunning amount of 18 animatronics, most of them even already integrated into the installation.

Bringing a mechanical toy crane to life with some servos 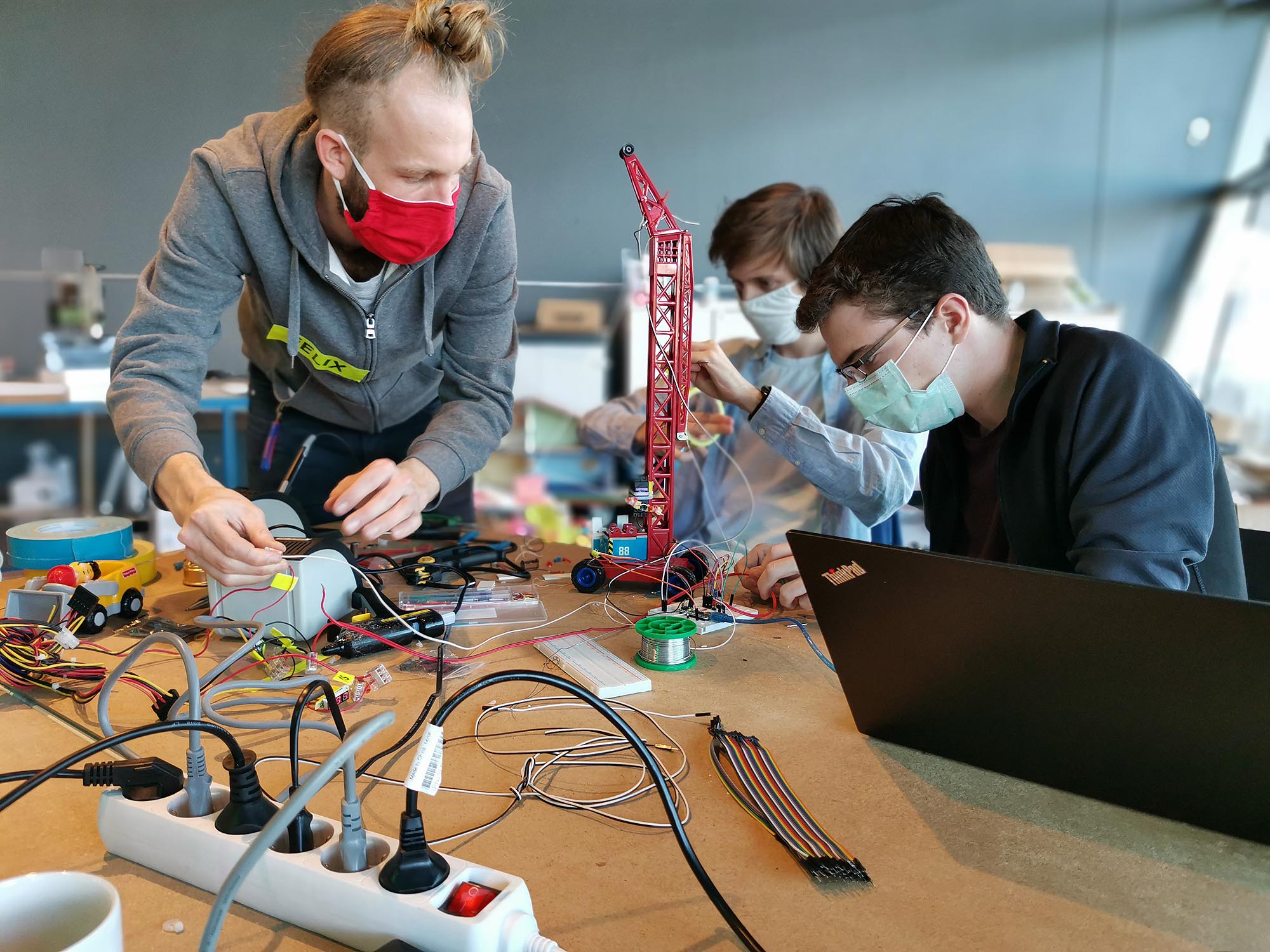 At the end, Wolfgang ordered me to build one more machine which would communicate our building process: the self rotating white board that we placed next to the installation. It showed all our construction plans and schematics on one side and on the other side were the kids' drawings. It turns from time to time when people play with the installation.

In our schedule, we still kept two days after the hackathon. We used them to give the installation a final touch, before it would be presented to the public. By that time, Wolfgang basically had already become part of the core team. He helped to finalise unfinished animatronics while Felix was updating the smartphone interface. We tested the machine, cleaned up the room, turned the spotlights on and everything was ready for the show!

The installation behind the window of Phæno's “idea space” 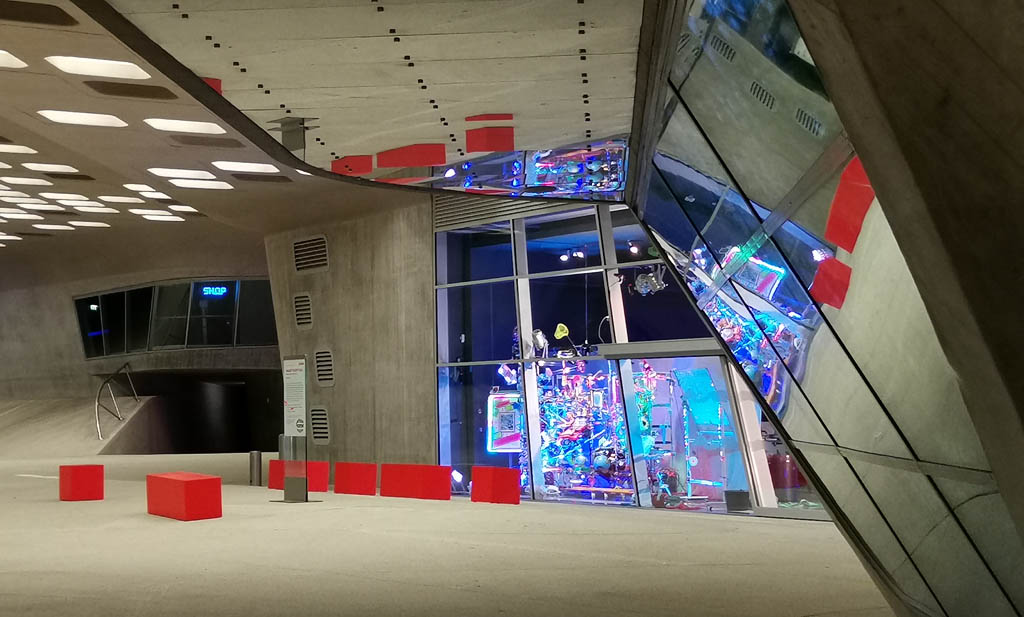 Needless to say, it was a success! Not only was it a great pleasure to observe the visitors examining the details of the machine - there were also still plenty of surprises to discover for ourselves. It turned out that the days of building were so busy that we haven't recognized every little decoration that entered the scene behind our backs. Even though the machine did not tell any clear stories, there were a lot of scenes to interpret, like the blow-up love story, the chemtrail conspiracy and the fossil fuel disaster, which culminates in a major traffic jam. The latter one even involves a laboratory for breeding synthetic dinosaurs by the use of renewable energies and now I'm wondering if this might be a creative way out of the climate crisis?

To be honest, I'm not so sure. 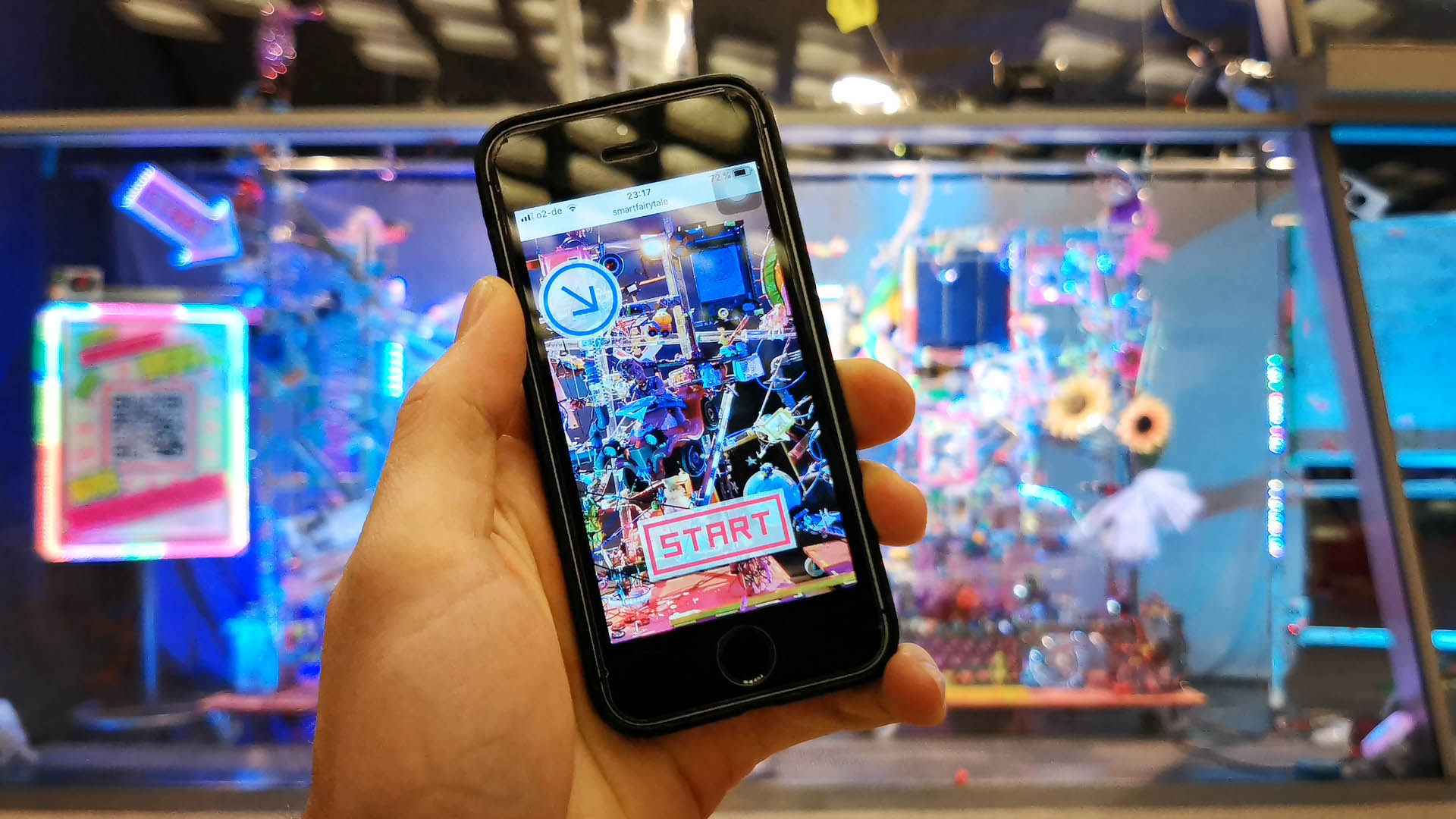 Let's have a look under the hood and see how this installation works. The control interface is a simple website, showing a large photo of the machine, much bigger than the screen. That way, the visitors can swipe around on their phones and discover some buttons placed over the photo. Hitting those buttons on the picture turns the track switch immediately at the same place in the real installation. There is also a big start button at the bottom of the screen. Pushing it triggers the ball release and starts the spectacle.

The remote controlled switches are rotated by small RC servos

Visitors can access the control interface by connecting to a local WIFI network and then opening the installation's URL in their browsers. Using just a local network without Internet connection makes things simple. It is easy to build the interface and at the same time, it restricts the use of the installation to people in its close proximity. But to be honest, it also confuses a lot of people. Not everyone is familiar with the concept of a network that's not connected to the Internet. It is an approach that makes the installation also a bit exclusive. 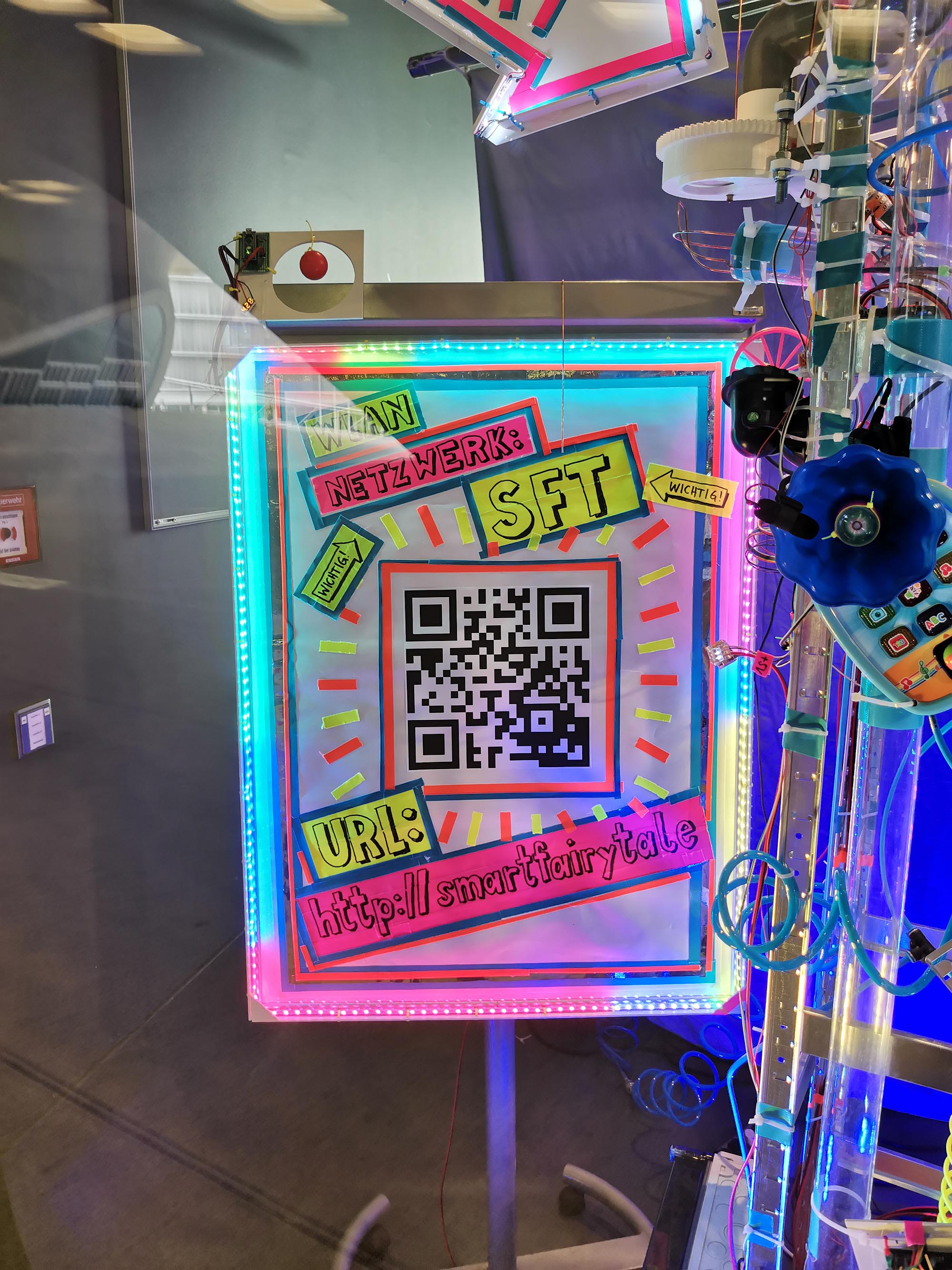 The server of the installation is a Raspberry Pi. Via its GPIOs it controls the track switches and releases the ball. Server and smartphones communicate via the WebSocket protocol, which updates all connected devices in real time. If one person hits a button, everyone else who is logged in sees the switch turning too, not only in the installation, but also on their phones.

Most of the wiring is done with solderless WAGO connectors

Pipes, animatronic modules and other decorations are attached with fabric tape and zip ties to the main structure, which is made of cheap metal shelf parts. The structure itself is placed on wheeled boards. For transportation and storage, it can be taken apart in three separate elements. Therefore, every shelf also has its own power supply at the bottom. 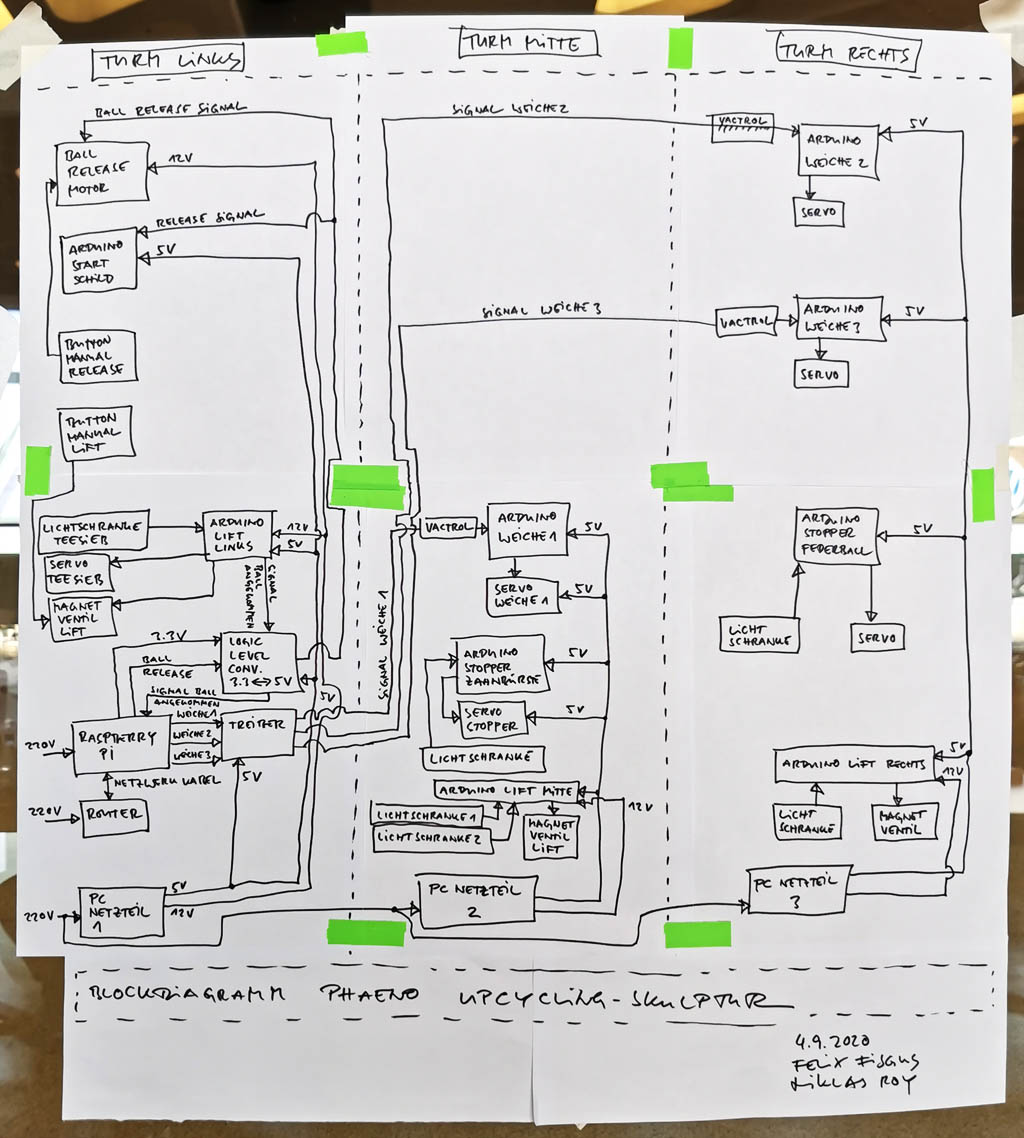 The acrylic tubes and the sewage pipe couplings are reused from previous projects. Some extra elements are 3D printed, like the ball release assembly, which is inspired by the mechanism of chewing gum vending machines, the track switches, and the pneumatic ball elevators. They are Venturi air movers and there are three of them in the installation, one in each shelf structure. When switching a magnet valve, they redirect compressed air upwards inside the tubes with very high velocity. This lifts up balls in a simple way, as there aren't any moving parts involved.

Each animatronic is made as a separate module, controlled by its own Arduino Nano. Independent animatronics with no signal wires between any of the Arduinos help a lot to keep the circuit and the codes manageable. It also ensures that the installation still runs in case one of the modules fails. The only way of communication is the optical sensing of the ball inside the tubes, with light barriers. 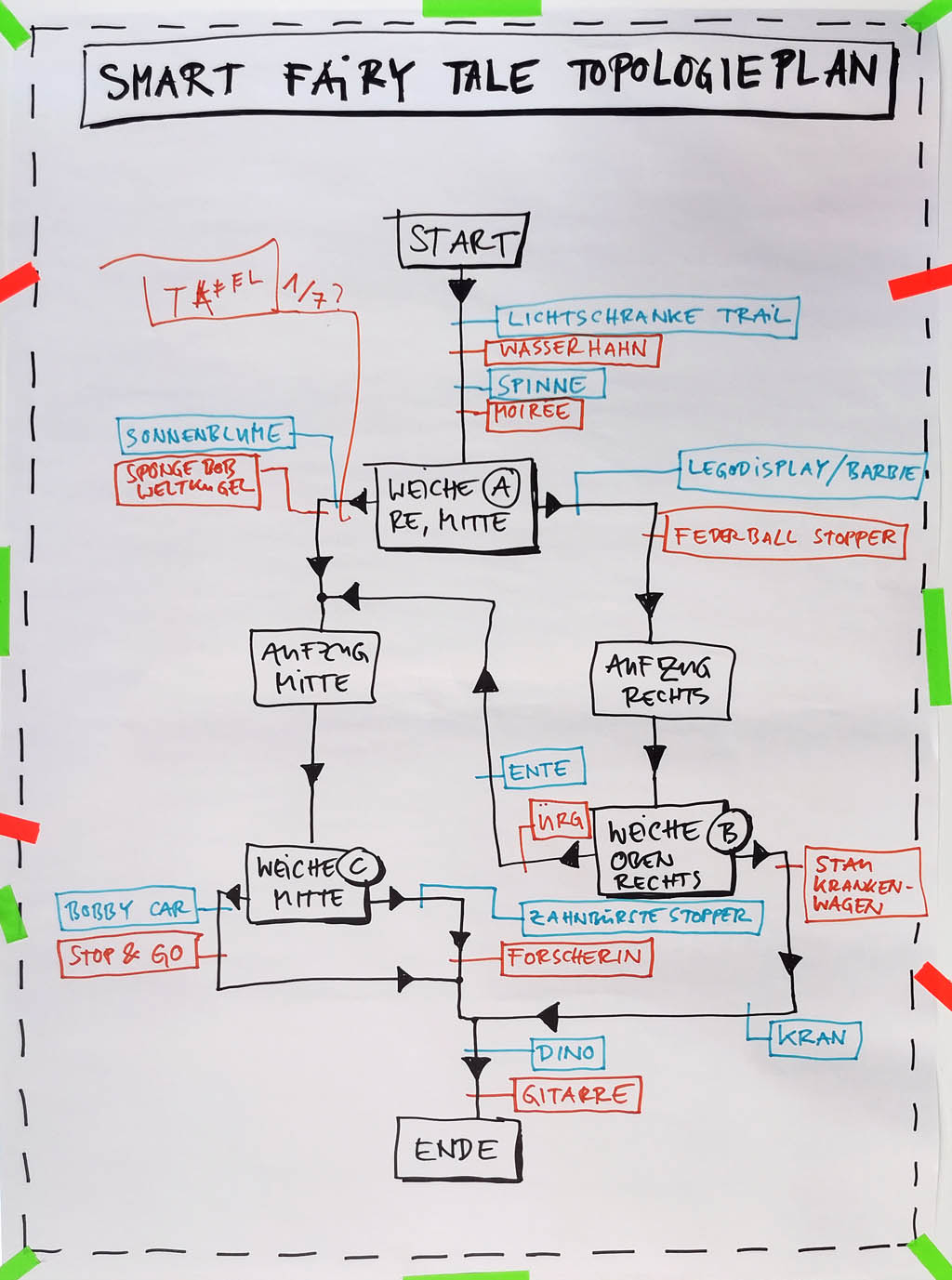 The light barriers consist of a 3D printed part that holds a bright white LED opposite to a photo resistor (LDR). This can be slipped anywhere onto the pipes. Felix wrote a small Arduino library to read them. The code makes the LED flicker and by comparing the LDR's resistance with the LED turned on and with the LED turned off, the microcontroller can sense a ball passing reliably, even if the environmental illumination changes.

The shuttlecock turns after the light barrier is interrupted

To move things physically, each Ardunio controls some servos, DC or stepper motors. There are also toys which don't move at all, e.g. the musical ones. Their existing electronics are connected with their Arduino via a relay board. The repeating tunes coming out of the installation also make the machine work as an unexpected, yet quite efficient earworm factory.

Being placed behind a large window, inside the museum's so-called “idea space”, visitors can see the installation from the “cone hall”, which is the name of the public area beneath the building. Luckily, Phæno has a proper PA installed inside the cone hall's ceiling. Using the Dante protocol, a few small lavalier microphones transmit the machine's sound directly to the speakers above the visitor's heads. 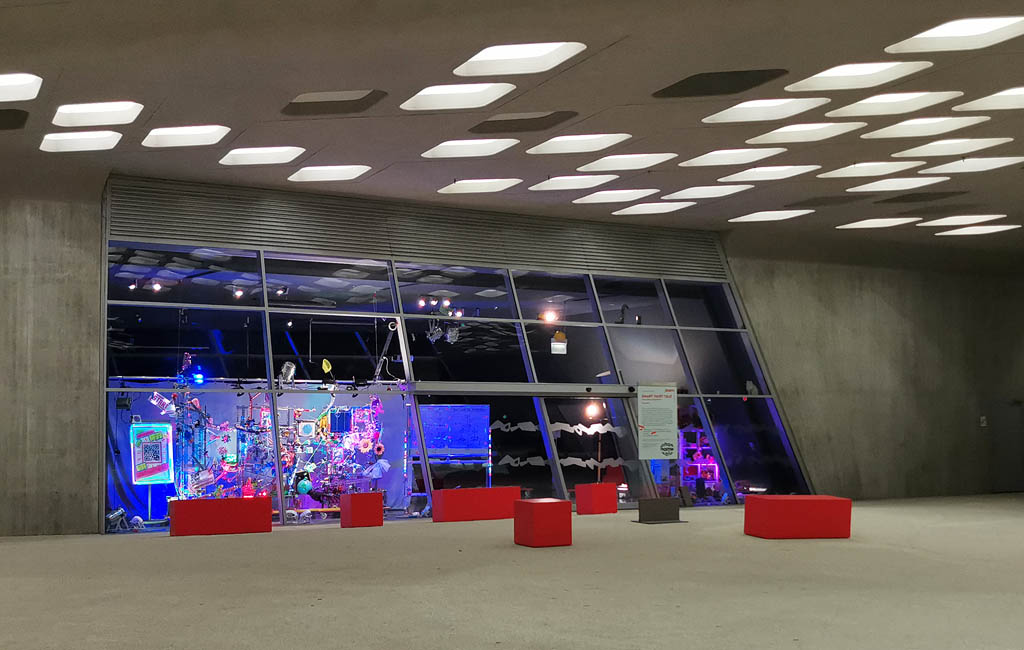 First of all, thanks a lot to Dr. Christof Börner, Mareike Wiese and Davy Champion of Phæno for coming up with the initial idea for this phenomenal project and for inviting Felix and me to bring it to life! It was a great pleasure for us to work in Wolfsburg at this marvelous place.

Also big thanks to the school kids, Wolfgang, and all the other collaborators who came up with so many unique ideas, built such creative animatronics and made this installation so literally wonderful!

And let's not forget all the nice people of Wolfsburg, who donated all the toys - thanks a lot for bringing them over. This was exactly the inspiring material that we needed!