The Music Construction Machine is a large, public, generative music box, which people can operate via a big hand crank. Rotating the crank moves various mechanisms inside the giant box, producing ever-changing melodies and rhythmic patterns, played with an electric guitar, a keyboard and a drum set. As the machine is contained in a transparent glass pavillon, people can observe and contemplate on its inner workings while cranking.

Parts of the installation in my studio in Berlin, before it is set up in Poland

The installation is exhibited on a public square called Plac Nowy Targ in Wrocław, Poland, for everybody to enjoy. It is a part of the city’s European Capital of Culture program.

The finished installation in the Pop Up Pavillon in Wrocław 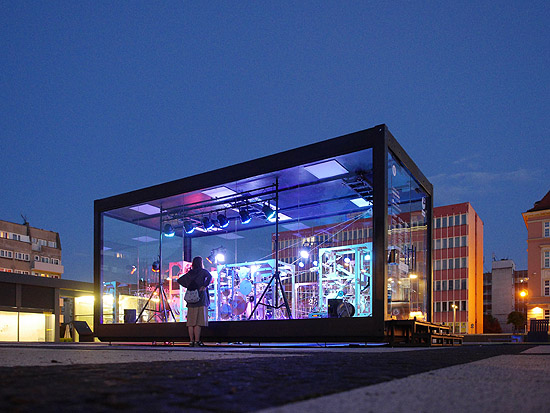 As we all have different tastes in music, I decided to abandon the traditional concept of a music box, which would play a pre-programmed melody repeatedly. That would satisfy the musical taste of only a small fraction of the crankers and listeners. Instead, the music is generated by an algorithm, which is implemented entirely in mechanical hardware and which iterates through all kinds of possible sequences of beats and tones. Thus, the machine permanently ‘constructs’ new ‘music’ while it is being operated, hence the name “Music Construction Machine”.

The moving glider on the fret board

Although the hardware determines which tones are played, the operators still have a strong influence on the interpretation and expression of the music, as they can decide how fast they crank and where they interrupt the flow of music.

Of course many of the melodies that the machine produces don’t sound beautiful by traditional standards. One might even question if the sound that is generated by the machine can be regarded as music at all. But then again – where exactly is the borderline between noise and music? I’m not able to answer this question. But if someone cranks long enough, eventually musical structures will appear, which might match the operator’s taste perfectly. It’s just a matter of patience and careful listening.