In collaboration with Kati Hyyppä, Berlin, 2015

The Forbidden Fruit Machine is based on a painting called ‘The Fall of Man’ created by Cornelis Cornelisz van Haarlem in 1592. The painting depicts Eve and Adam in the Garden of Eden, being tempted by the serpent to eat the forbidden fruit. When Cornelis made his masterpiece, oil paintings were the hi-tech medium of the time. They featured incredible detail and ultra high resolution. Some 400 years later Kati and me decided to turn Cornelis’ artwork into today’s equivalent top-notch medium, namely, a video game. 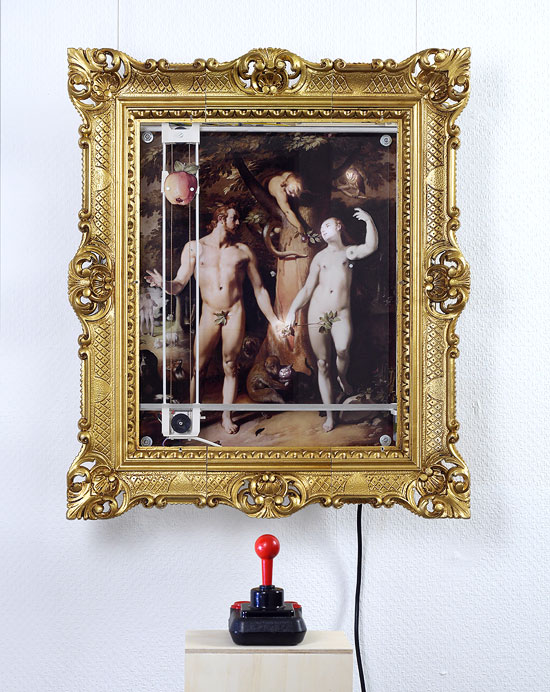 The most essential add-on to Cornelis’ painting is a joystick with which the spectator can take over the destiny of the forbidden fruit. By moving the apple around on a biblical quest, the player can discover exciting special effects hidden in the picture. Lights give a hint where the effects can be found and a joystick button press triggers them. For example, pressing the button over the cat in Eve’s and Adam’s feet elicits a heart-breaking meow, while letting Eve to eat the apple results in an even more dramatic effect including a thunder storm! 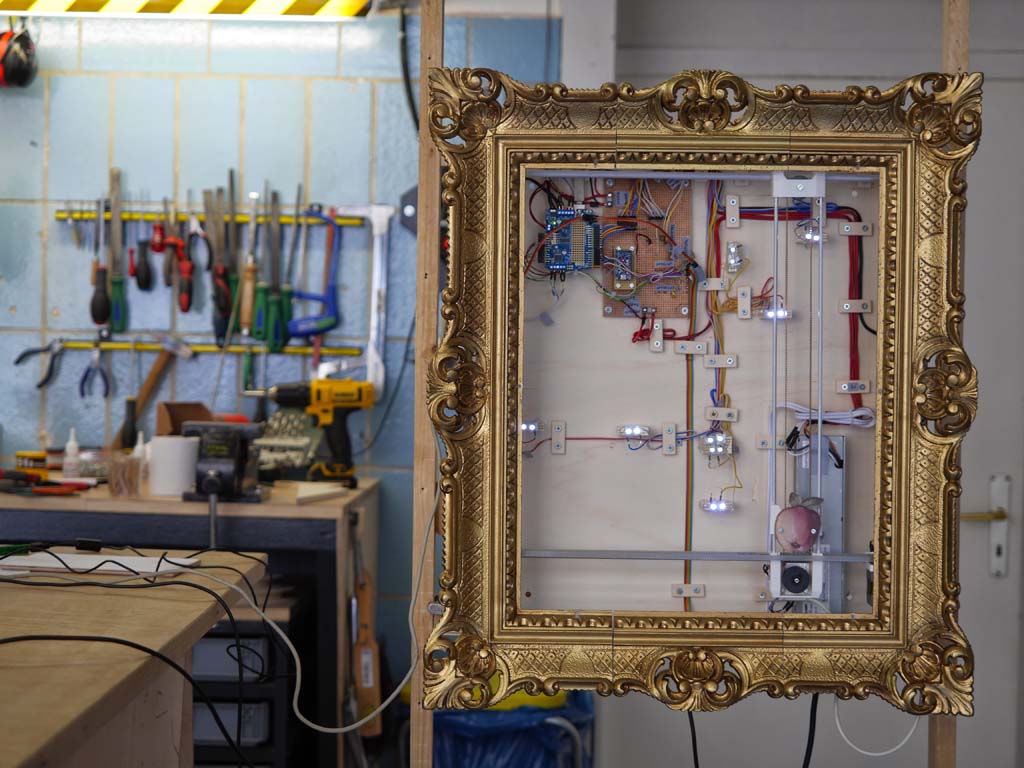 The picture of the painting that we used as a basis of the machine is from the Rijksmuseum’s public domain image collection. It was edited and printed on a transparent acrylic glass. The special effects also include openly licensed sounds from the Internet Archive, the Free Music Archive and Freesound such as sound effects from the YLE archive. You can find the full credits in the end of the video.

The image and moving parts printed on acrylic 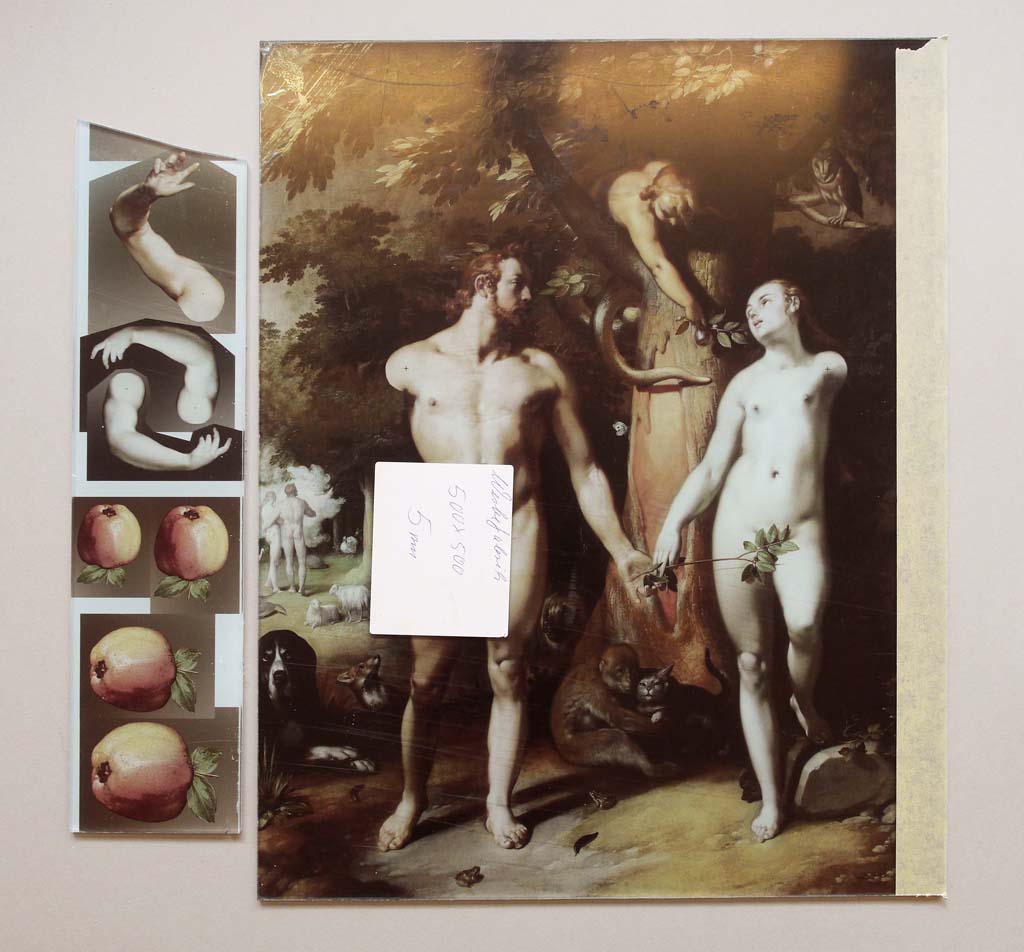 The operation of the machine is controlled by an Arduino Uno, which is stacked with the Adafruit Motor Shield V2.3 and Adafruit Music Maker Shield. The XY gantry mechanism which moves the apple was made using 3D printed plastic parts, aluminum rods, timing belts, gears and two stepper motors with end switches. An additional board including an Arduino Pro Mini was also used for producing light effects and for reading the motor end switches and the joystick output.

The electronics during assembly 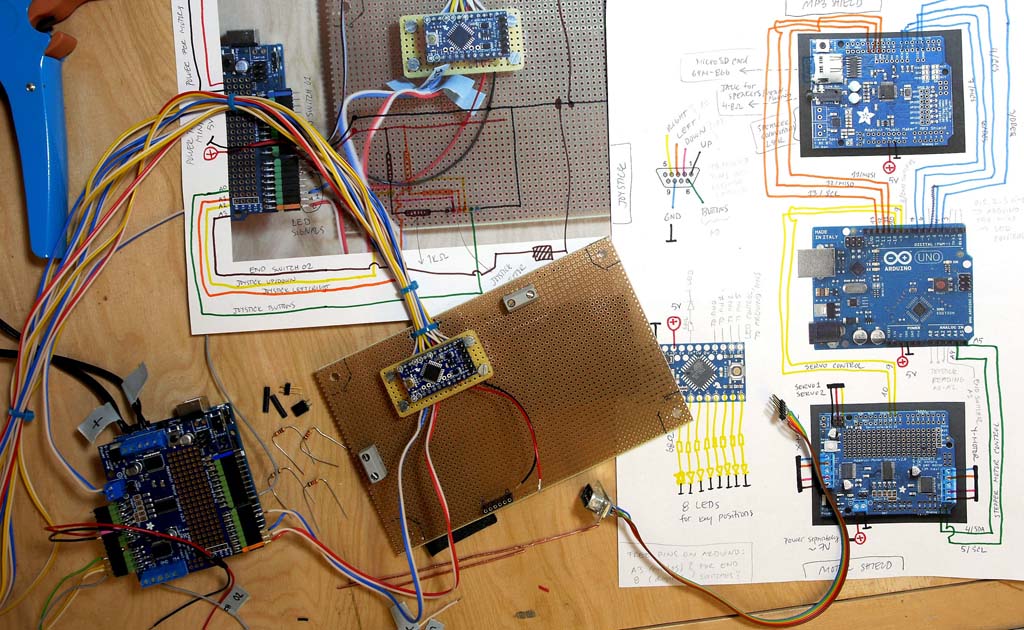 We want to thank all the institutions and individuals who have released content with an open license so that we could use it in the Forbidden Fruit Machine.