“Suck the Balls!” lets people escape the daily grind and immerse into an endless, ecstatic play with thousands of little yellow plastic balls.

The installation consists of a ball pit and an 80 meters long pneumatic tube transport, which fills up the entire historic staircase of the Potocki Palace in Kraków. When entering the ball pit, the cabin’s lights switch on and the ball suction action starts! The visitor can operate the peculiar machinery with a suction spout. When sucking the balls which are surrounding his feet, the balls race through the transparent pipe system, creating a visually stunning scene. The journey of the little balls ends in a container above the ball pit, waiting for the climax of the operation: When the visitor pulls the release handle of the container, a fountain of balls splashes down onto his head in a joyful shower.

A helmet is provided to keep the hairstyle in excellent condition throughout the whole experience.

GIF made by Prosthetic Knowledge

Before I was setting up the machine in Kraków, of course I had to try it out in Berlin, first. I asked my good friend Günter Schulz to come over to my workshop for beta testing. He’s quite a technology aficionado and as you can see in the video below, he really enjoyed to play with it. He experimented with the system’s aerodynamic properties and figured out immediately, that he can control the speed of the balls by covering the spout with his hand. This speed control causes quite an amazing effect, especially in the final installation, where the track of pipes is much longer and has a more complex shape.

Below are some photos of the installation and a bit more explanation of how the machine works.

Günter is demonstrating the suction spout on the left. With the spout, he can suck the little plastic balls through the pipe system depicted on the right. The suction power is provided by a standard household vacuum cleaner, which is automatically switched on by a simple motion sensor.

Günter is trying out the installation 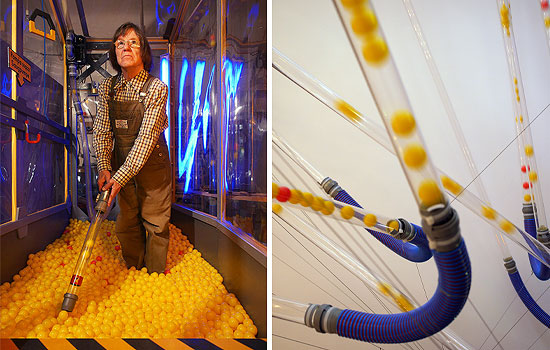 The ball pit is filled with 10.000 small plastic balls made out of LDPE. That material is flexible, so even if you step on the balls, they keep their shape. The balls are similar to normal ball pit balls, except for being smaller, as they need to fit inside the pipes. Pingxiang Zhongying Packing Co. Ltd. from Jiangxi in China (a company I found via Alibaba) produced them extra for this installation and I’m really happy about how they turned out! The only downside of the balls is that the yellow plastic rubs off and sticks on the inner surface of the acrylic pipes. So the crystal clear pipes get dull over time, which is a bit, well, dull.

The container above the visitors’ heads

The transparent pipe system is connected to a container, which is shown above from its back side. The container is mounted on top of the ball pit cabin and the sucked balls accumulate in there. You can imagine it as a big solid vacuum cleaner bag. The transparent hose on the top left is connected to the actual vacuum cleaner. That’s where the negative air pressure comes from. The red/blue hose on the top right is the inlet for the balls. The container is tilted slightly downwards, towards the center of the cabin. A release handle is connected via ropes and pulleys with the front lid of the container. When the handle is pulled, the collected balls shower down on the operator, which feels pretty intense! As the container is quite large, the shower can be enjoyed for quite a while. 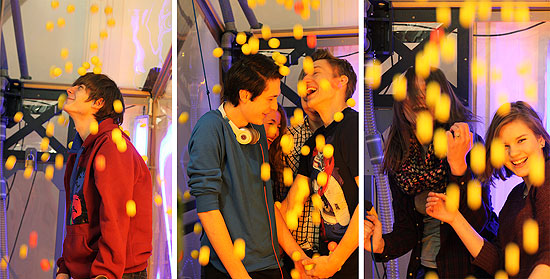 Visitors figured out intuitively how to use the installation. But I have to admit that it was a long way to get the machine this simple. I started the project with a slightly different suction system in mind, which turned out to be too complicated:

At the beginning, I wanted to avoid the container on top of the cabin and have rather a constant running shower of balls whenever a visitor sucks. For this purpose, I used a compressor instead of a vacuum cleaner, and I constructed several versions of suction nozzles which made use of the Venturi effect. With these nozzles, the balls could be sucked continuously through the pipes and they simply dropped out of the last pipe’s ending. 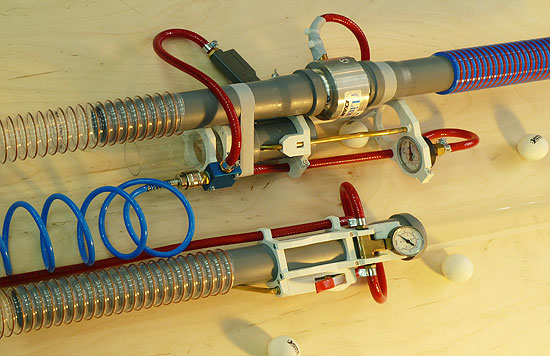 That principle worked incredibly well on a small scale with ping pong balls. But when I tried it out with a longer track and with plenty of the actual ball pit balls, it used too much compressed air. I would have had to use a huge industrial compressor to power the installation. And that would have been too expensive, so I went for the vacuum cleaner and the ball collection container solution instead.

Since it is a bit hard to see the whole cabin in the installation videos (the space in the staircase is so tight that it wasn’t easy to get it fully in the picture) – here’s a photo of the cabin when it was still under construction: 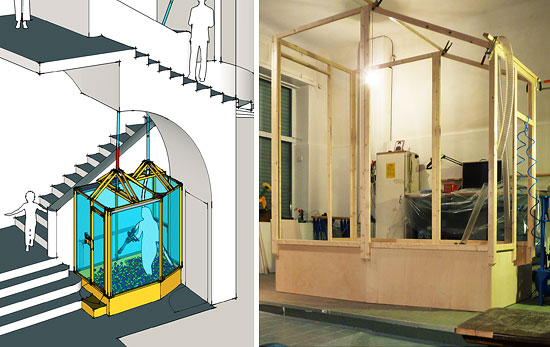 After 3D-modeling the cabin first in Sketchup, I built it out of plywood and lightweight wooden frames, which I later covered with thin transparent PETE. This kind of plastic is usually used to build greenhouses, but in this case it turned out to be the perfect material for keeping the balls from falling out, while still providing a view to the playful action inside.

I think that’s it for now. The last thing I can say, is that this was really a fascinating project, which included a lot of experimentation and research. In fact, sucking balls sucked everyone in so hard, that the Goethe-Institut in Prague wanted to have their own ball sucking machine. So I've built a second one in 2015:

For the installation in Prague, the pneumatic track was roughly 70 meters long. It went from the Goethe-Institut’s entrance hall, through the staircase into the first floor, where it passed the institute’s library, then it made its way back to the ground floor. The balls were racing through the entire pipe system within 11 seconds, which made them in average 22.91 km/h fast (The video above is in slow motion). That was stunning to watch and fun to play with!

If you want to see another ball sucking installation that I've built, have a look at the Pneumatic Sponge Ball Accelerator that I've built for the Tschumi Pavillon in Groningen.