“Perpetual Energy Wasting Machine” is a rope and pulley mechanism, installed in the staircase of the WRO Art Center in Wroclaw, Poland. The mechanism connects the sliding doors of the elevator in one floor with the elevator call button on another floor. Operating in two directions on the first and on the second floor, the contraption automatically moves the elevator cabin in an infinite loop between those two levels.

The animation below shows the perpetual mechanism in action. The setup is powered by the sliding doors of the elevator. The pulley blocks reduce the sliding door distance of 50 cm to a traveling distance of 12.5 cm for the push button mechanism, while also connecting first and second floor of the building:

The different parts of the mechanism in motion

My first drawing of the system below depicts the general idea. If you are a mechanics geek, you might notice the conceptual difference between the sketch and the final design. If not, you can just scroll down and read on.

Concept drawing of the mechanism

Shown below is a close-up of the push button mechanism. In the bottom left, outside the picture, there hangs a 2.5 liters water bottle at the end of the red rope. This bottle acts as a counterweight, pulling the slider towards the elevator call button, as soon as the doors open on the other floor: 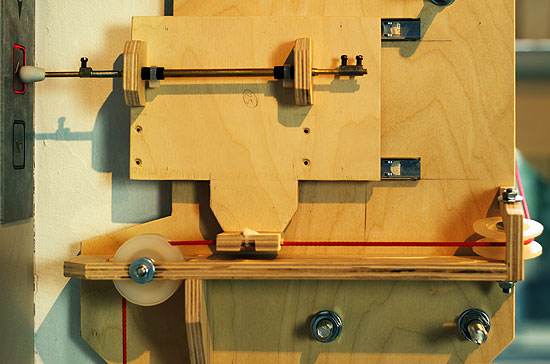 How much energy does the setup waste?

The “Perpetual Energy Wasting Machine” moves the elevator in recurring cycles. In the first half cycle, the elevator is lifted up one floor, while the latter half cycle brings the elevator down to its original position again. As this is an hydraulic elevator, and as the cabin´s mass is not equalized by a counterweight, only the movement up consumes electricity. Estimating that the empty elevator cabin has a mass of 350 Kilograms, the wasted energy is about 11.8 Kilojoules per cycle (which equals to the metabolic energy of ca. 1/3 grams of fat, according to Wolfram Alpha ). A modified printing calculator inside the elevator cabin keeps track of the wasted energy, automatically adding up 5.9 Kilojoules for each half cycle. The results of this symbolic calculation – which does neither regard energy loss by friction, nor a heavier cabin due to possible passengers – go straight to a waste bin, located beneath the printing calculator.

The modified printing calculator is synchronized with the elevator movements by a microswitch, mounted next to the sliding door:

The modified calculator inside the elevator

But what about the law of conservation of energy?

As we’ve learned in school, and as most of the readers might still remember, energy cannot be wasted. It can only change its location within a system. So what happens to the energy in this elevator system? Where does it go? Well, firstly, electric energy is used to lift up the elevator cabin (via a pump, with a hydraulic cylinder). When the elevator has reached the second floor, this energy has transformed to potential energy of the elevator cabin in its high position. The potential energy is released when the elevator returns to the first floor. In theory, this obviously doesn’t require any electricity, as the cabin could be just dropped. However, this kind of rapid plunge would cause discomfort for possible passengers. Thus, having a controlled descent using the hydraulics might be a good idea: For example, the hydraulics oil could be released gradually from the cylinder through a valve. I don’t exactly know how this elevator type works in practice – but let’s assume that the opening of a valve is all what happens. Now, pushing the oil through the small hole of the valve heats up both, the valve and the oil, due to friction. So finally, when the elevator has returned to its original position, the electric energy used to lift the cabin has been turned into heat.

From theory to practice

During the first test run of the mechanism the law of conservation of energy was working well. Heat was indeed accumulating. After running the elevator for a few hours without a break, it finally broke.

The elevator service guy, whom the art center called, entered the operating room together with me. It was very warm and slightly smelly in there. The heat source was clearly the container of the hydraulic oil. Thankfully, the room had an electric fan installed, which blew out the heat into the nature. After an hour or two of cooling down, the elevator and my installation worked again. And the elevator service guy found the installation quite funny. He advised me to let it run continuously for one hour at a time, and then to switch it off for another hour in order to let the hydraulics chill out. Due to our language gap, I was unfortunately unable to explain him the importance of the project’s underlying concept of perpetuity in detail.

At the end, the law of conservation of energy renders the title of this project incorrect for two reasons: It cannot operate continuously due to overheating. And it only transforms the electricity which it wastes. So “Electricity Wasting Machine With Limited Perpetuation” would be a more correct title for the contraption. Well, that’s also fine for me.

The installation was produced during an artist residency at WRO Art Center, funded by Goethe Institut Krakau. It is now part of the collection of the WRO Art Center.

Thanks to Goethe Institut Krakau for funding and to WRO for hosting this residency.