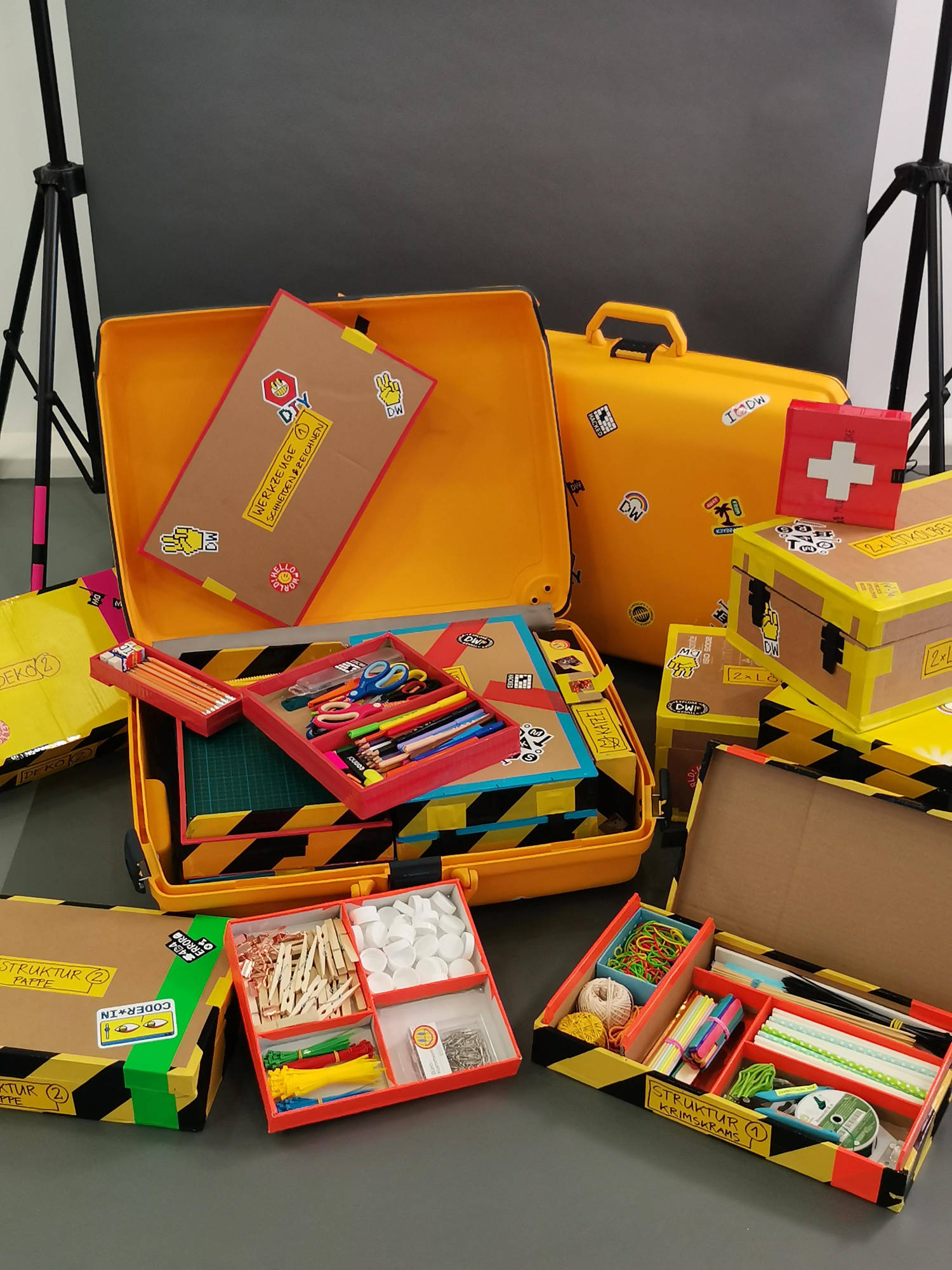 In collaboration with Kati Hyyppä as part of FlieKü im Quartier

“Basteln” is a unique German word. English dictionaries offer something like “make handicraft” as a translation, but it seems hard to capture the meaning and feeling of “basteln” in a compact expression. “Koffer”, on the other hand, refers to a suitcase. Hence, “Bastelkoffer” is a suitcase for crafts and DIY activities. 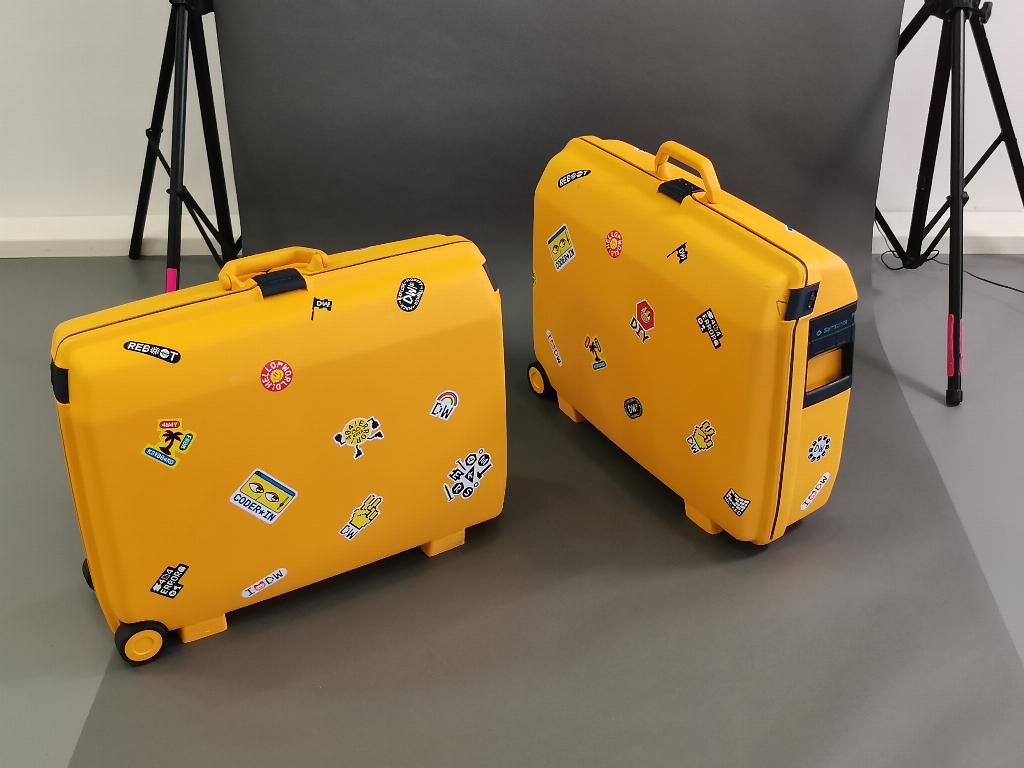 We developed the concept for the Bastelkoffer in spring 2022 as a part of open educational resources for Digitale Welten, a youth initiative focusing on learning creative skills. In summer 2022 the actual Bastelkoffer were created at a residency program called Fliegendes Künstlerzimmer im Quartier in Frankfurt am Main. Since Digitale Welten is also a partner in the project and there was a shared goal to organise workshops, lendable DIY suitcases seemed like a useful thing to have at hand. 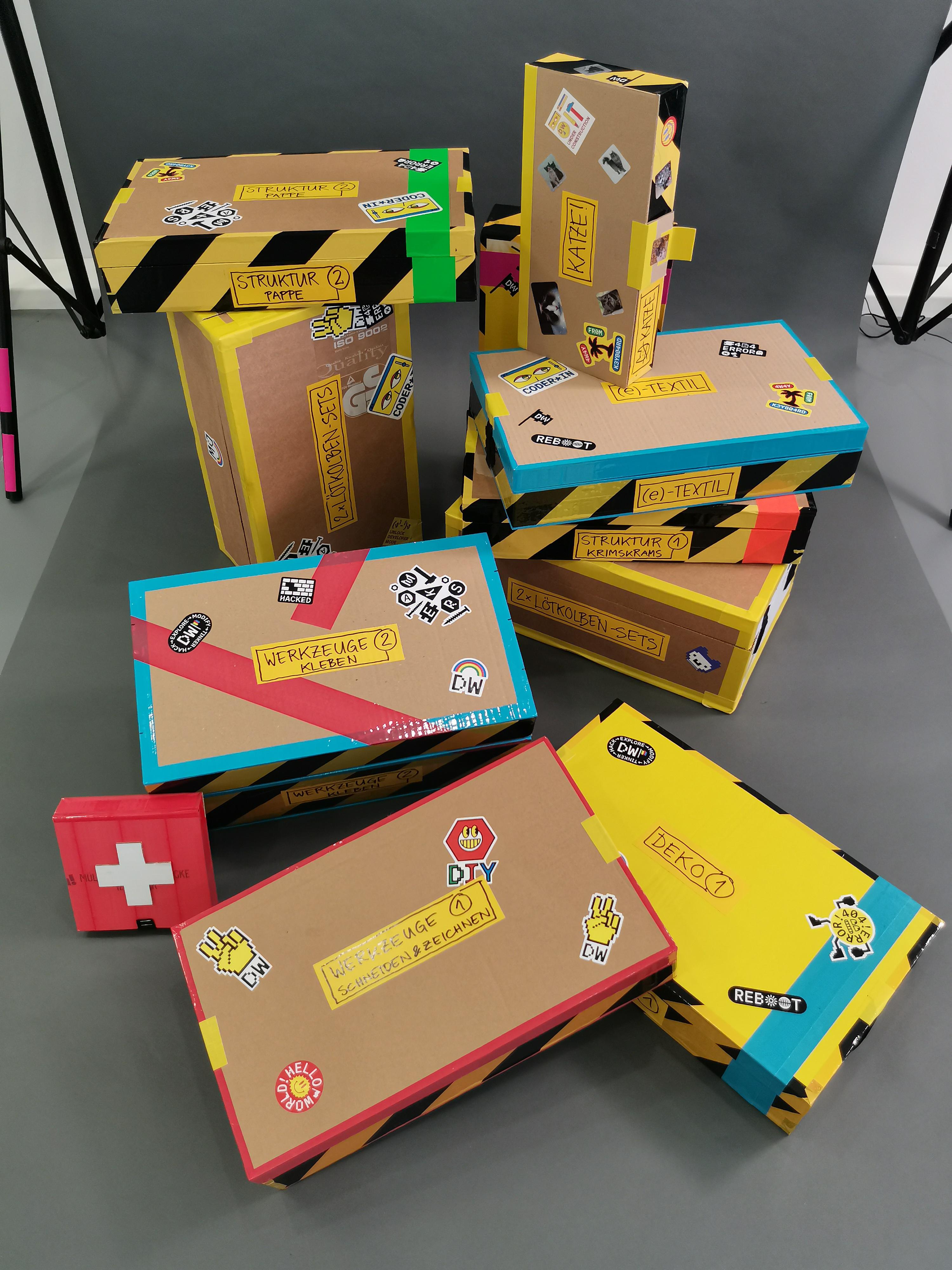 During a three-day workshop we made a set of thematic DIY boxes, which can be fitted into suitcases and taken to an event or a workshop. The boxes contain basic materials and tools such as cardboard, tape, yarn, pens and scissors as well as electronics related items like soldering irons and LEDs. The modular design enables fitting different combinations of boxes into a suitcase according to needs. The 90s style suitcases were bought used and the boxes were made from sturdy recycling cardboard harvested from supermarkets.

The material for making the boxes came for free from the local supermarkets. 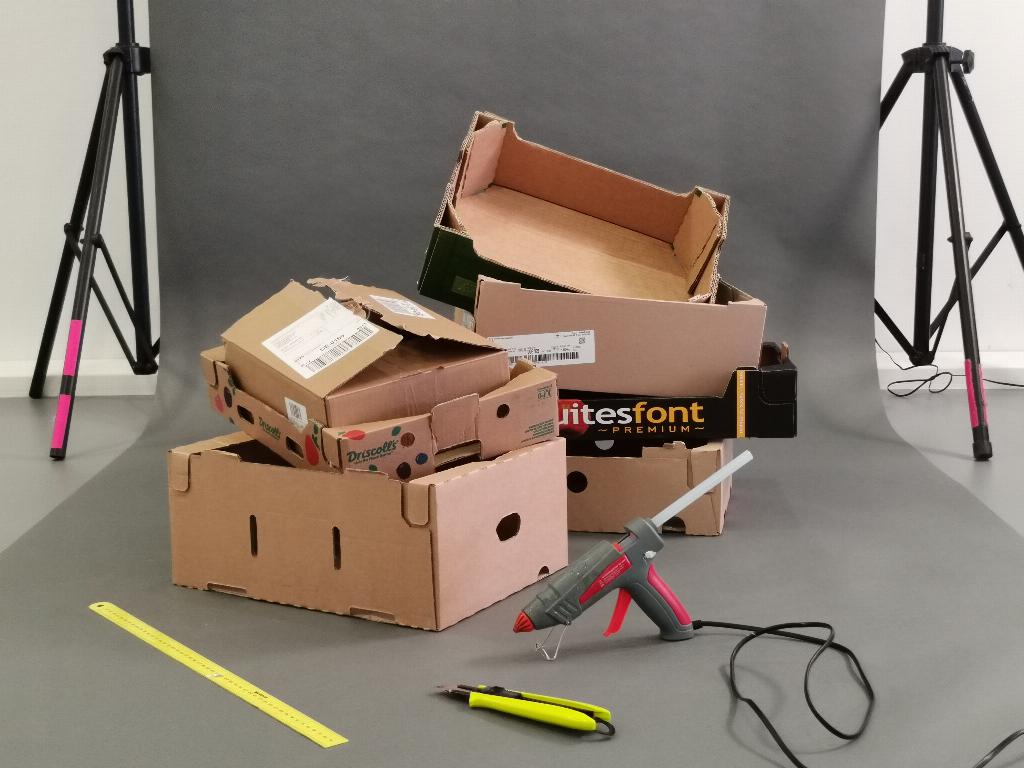 Kati and I have given numerous DIY workshops and in our experience it is helpful to keep materials and tools organised, but also be flexible in terms of variety. How materials and tools are presented also has an influence on how they are valued and spark inspiration. A large part of the materials in the Bastelkoffer-boxes were leftovers from old workshops, which received a new life in fancy hand-made compartments and treasure boxes. We hope that the Bastelkoffer inspire some of you to make recycling DIY boxes – or in case you are near Frankfurt, to borrow these ones from Digitale Welten.

To build the boxes exactly fitting to the suitcases, we measured their inner dimensions with a DIY tool made from straws. 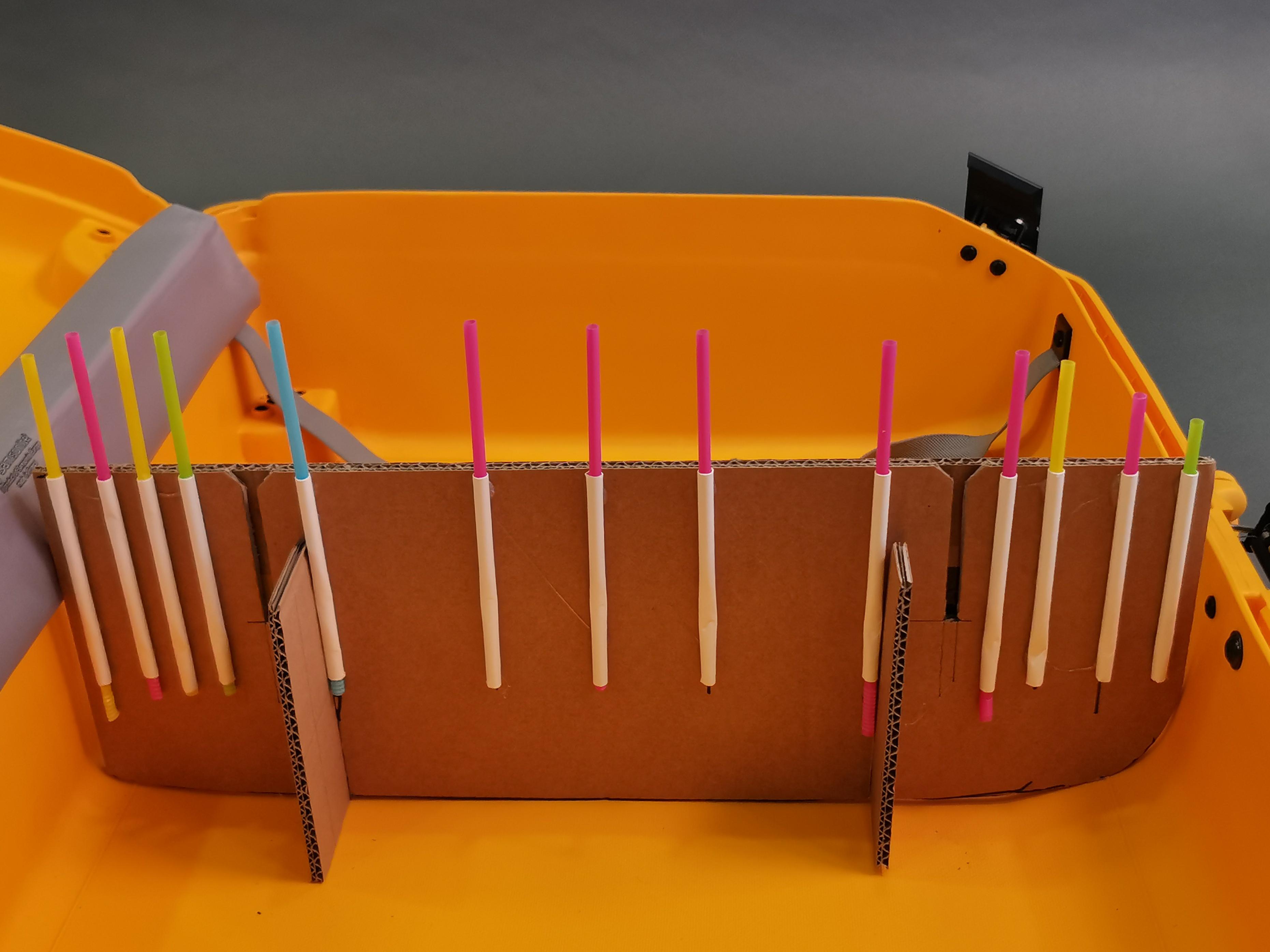 Then we used the measurements to build a grid of cardboard templates as maximum size reference for the boxes. 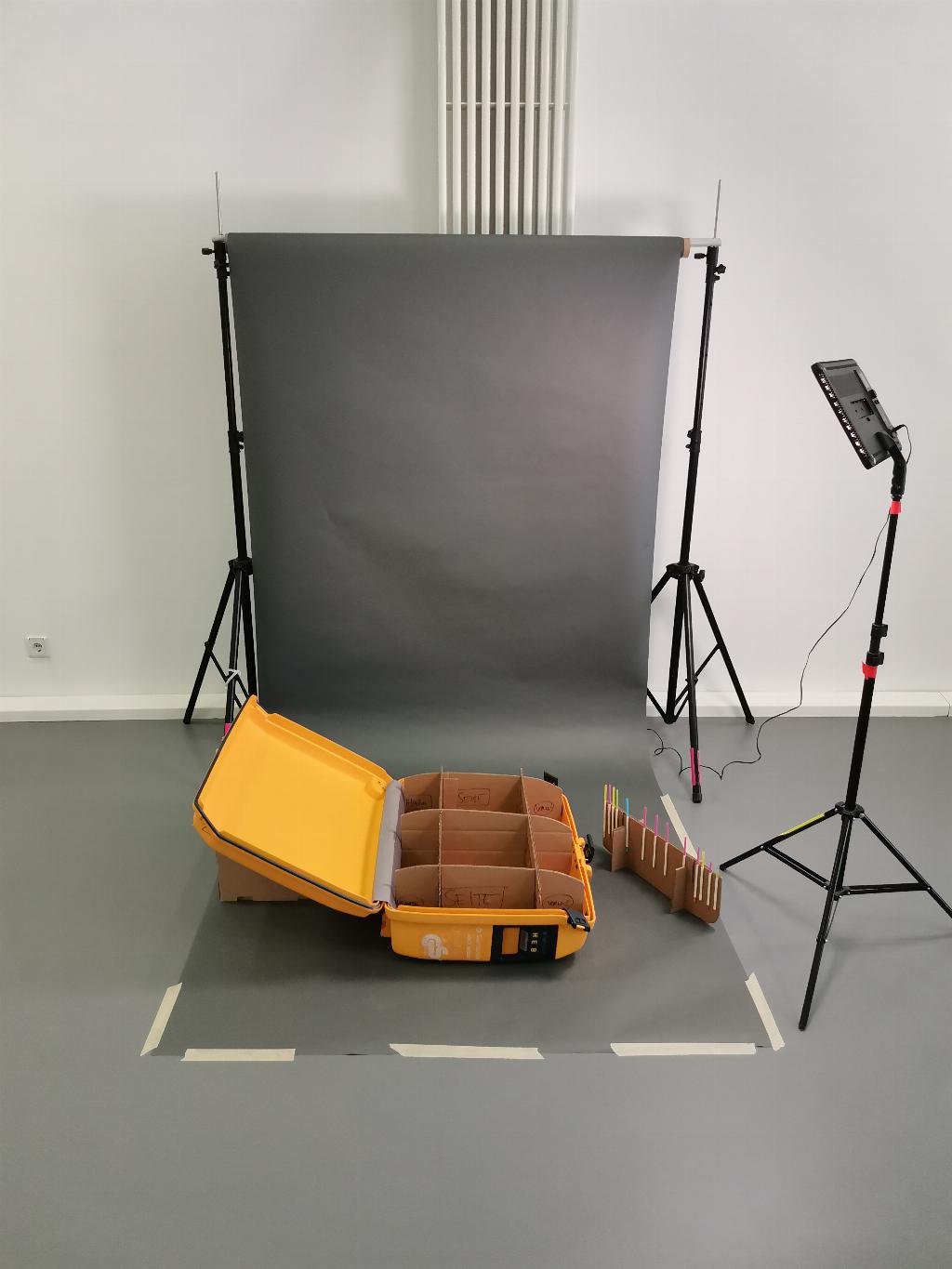 Bastelkoffer content
Altogether, we produced quite a solid stack of boxes during the three-day workshop. 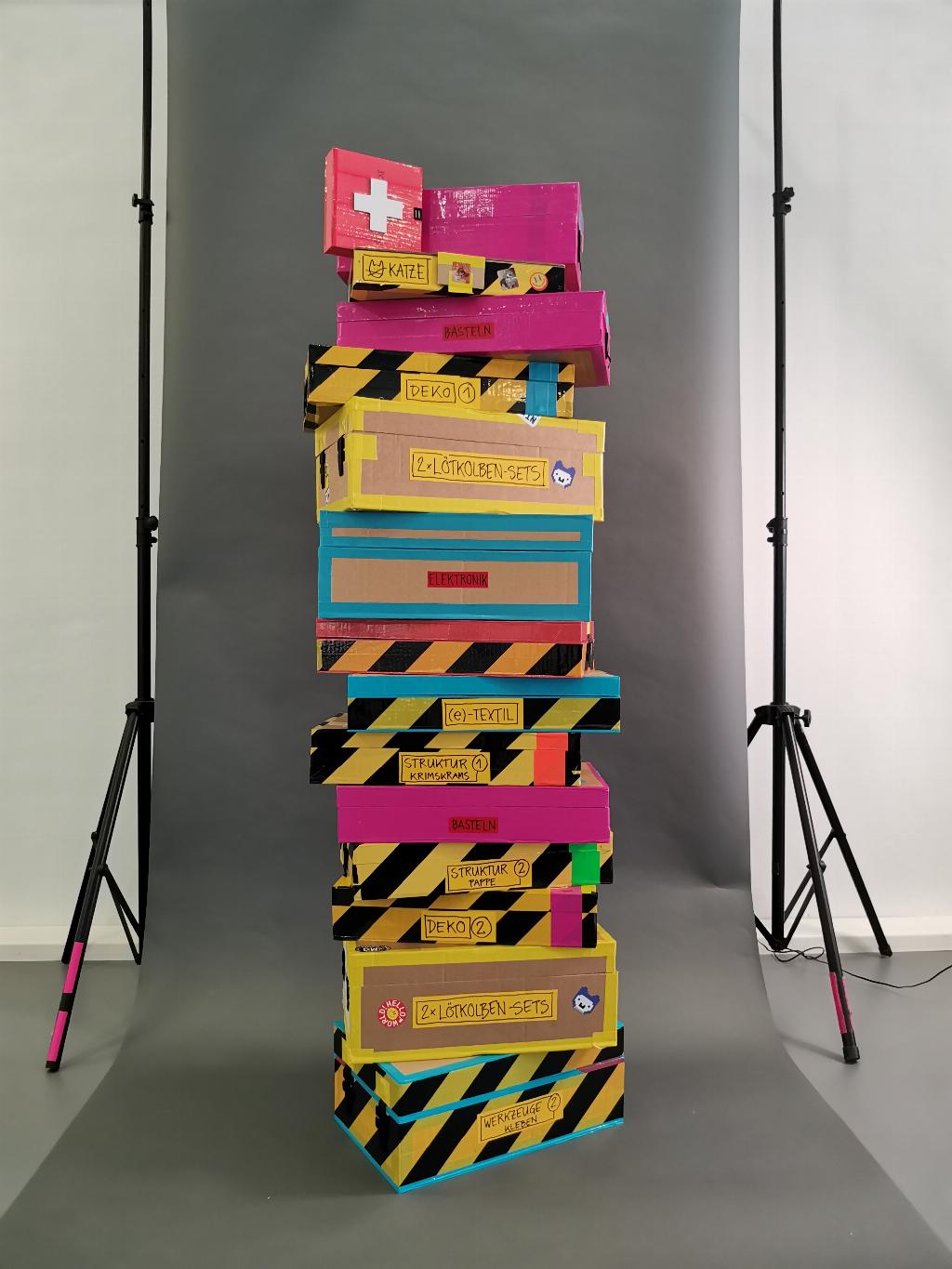 We thank Crespo Foundation and Digitale Welten for the opportunity to make the Bastelkoffer happen. Special thanks to Anna Meik for helping with basteling as well as to Nirvana and Marie, who made boxes of their own as a part of the Bastelkoffer workshop.