In collaboration with Kati Hyyppä, Lörrach, 2017

Space, the final frontier, has fascinated humankind ever since we started to stare at the sky. Already half a century ago NASA's Apollo program brought people to the Moon and the next generation rocket scientists are eager to make space flight mainstream. We also wanted to take part in the YouTube era space race where DIY rocketeers work in parallel with the big players, making their R&D with plastic bottles and hardware store materials.

A joung rocket scientist and I were dressed for success 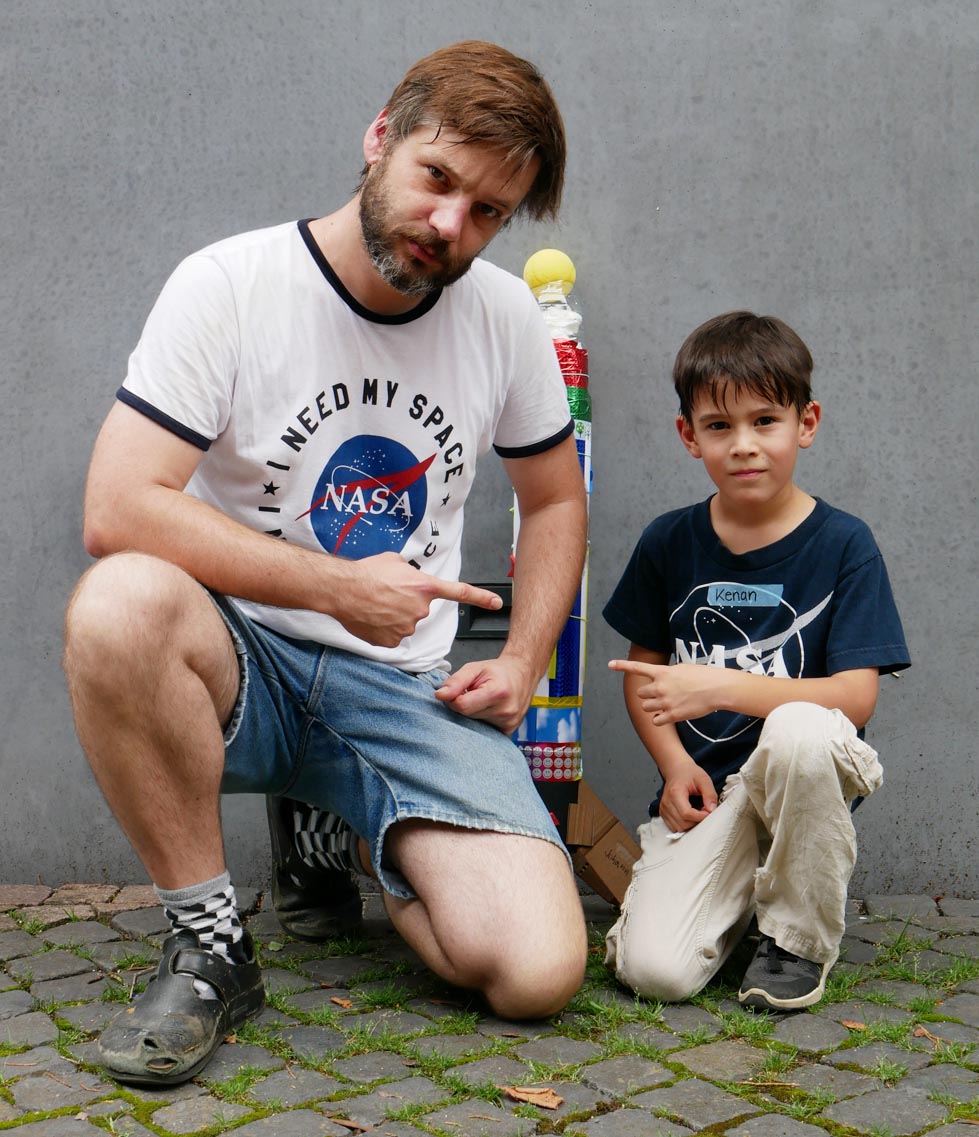 The sunny days of Southern Germany and the Junior Lab summer edition at the Werkraum Schöpflin seemed to provide the perfect setting for suborbital rocket science. Rather than relying on the ancient Chinese invention of gunpowder, we went for water rockets, powered by compressed air and H2O. During three days we built and launched altogether 12 rockets with 7-13 years old to-be Juri Gagarins and Valentina Tereshkovas. 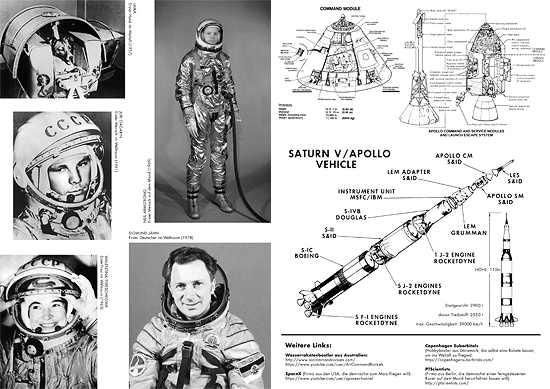 Before building the rockets we looked into the achievements of the space pioneers. Everyone seemed to be familiar with Laika, the famous Soviet space dog who orbited the Earth and tragically sacrificed her life for science. The massive Saturn V rocket also provided insights to rocket architecture and propulsion mechanisms. It became clear that in addition to the 1.5 liters plastic bottles we needed a long body, a nose cone and sturdy fins. Styling the rockets was also essential for recognizing into which suborbital program they belonged to:
“Saturn XXL”, “USSR”, “Chaos 1” or “Tuttifrutti Rainbow”. 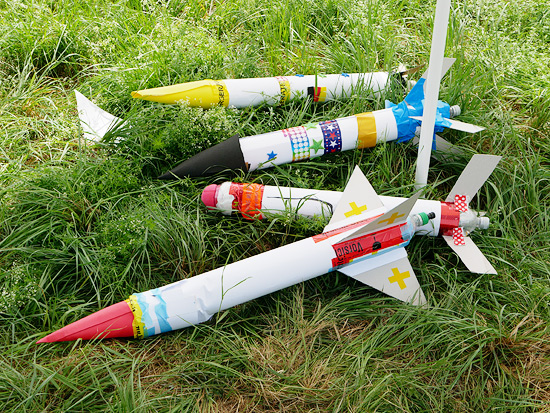 Once the spacecrafts were ready, we headed to the meadow opposite to Werkraum and set up a control camp for the launches. In the extreme temperature circumstances of 30 plus degrees Celsius four teams worked seamlessly and persistently. Launch Team set up the bicycle pump and ensured H2O supply, two Altitude Measurement Teams prepared the barometric and optical equipment and Video Team made three cameras ready for multi-perspective recordings. With each countdown the hot air vibrated with excitement and the beautiful sight of a vertically shooting, self-built rocket brought everyone to a shared and prolonged “Wooow!”

Calculating the altitude of each rocket's flight 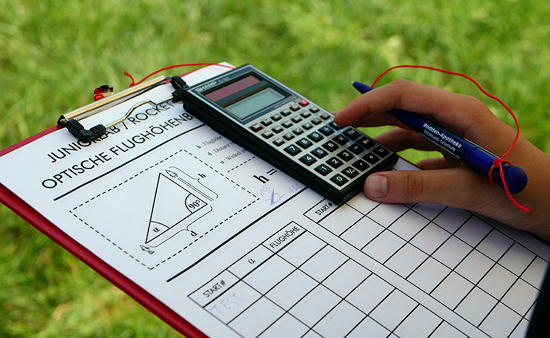 In order to obtain performance data of the different rockets, we made several measurements during each launch: Launch Team filled each rocket with precisely the same amount of fuel and observed the bicycle pump's gauge during pressurization. All rockets started with the same amount of energy in their tanks. 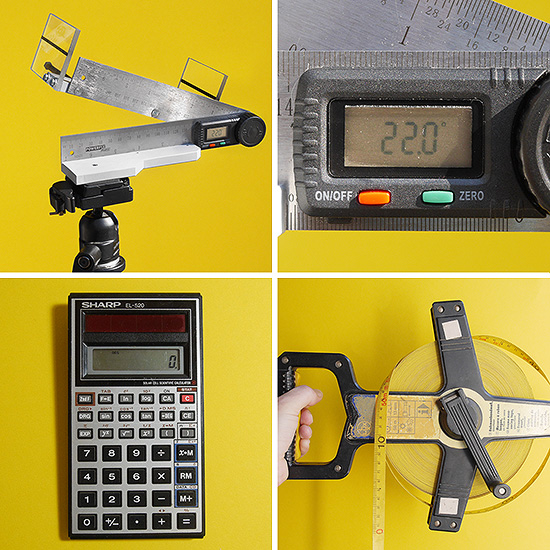 The Optical Altitude Measurement Team carefully measured the distance between their device and the launcher. During each flight, they tracked the angle between the launcher and the rocket's apogee. With this data, they calculated the maximum altitude of each rocket by using the following formula: 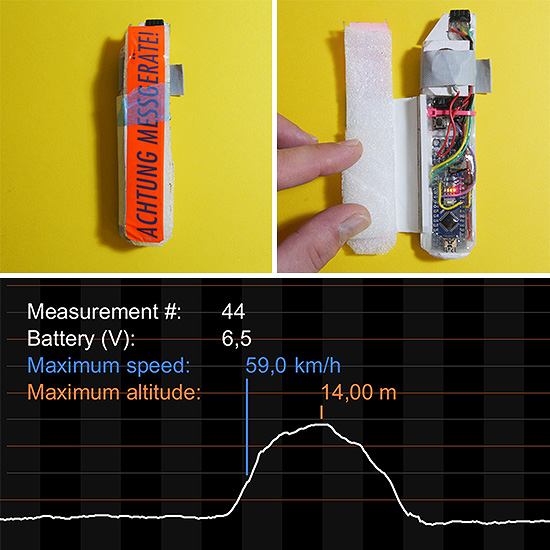 Since we didn’t want to rely on just a single method to measure each flight's maximum altitude, the Barometric Altitude Measurement Team equipped each rocket with a DIY Arduino based logging altimeter. That device took air pressure and temperature samples during each flight with 20Hz and recorded them for every launch. The kids analyzed the data right away with a Processing Sketch, which visualized the flight path and calculated the maximum altitude as well as the maximum speed of the flight.

It was exciting to see how precisie those measurements were: the results of both teams matched quite often with a difference of just one meter or less.

Video team is focusing on the action 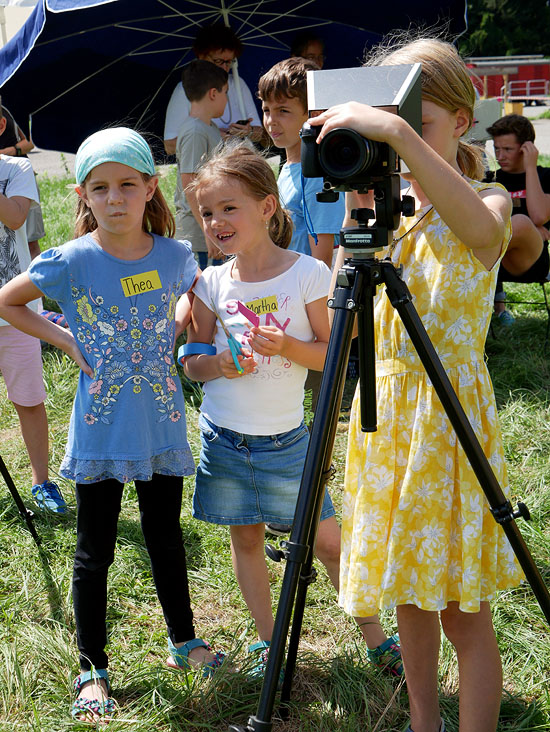 The Video Team also had a few tricks up their sleeve which helped to analyze each rocket's flight during debrief. They recorded all launches with a HD tracking cam, running at 50fps. A second, water proof, 240fps high speed camera was installed close to the launcher. The third camera showed us each flight from rocket perspective: It was a little spy cam with wide angle lens that was taped on the outside of each rocket. 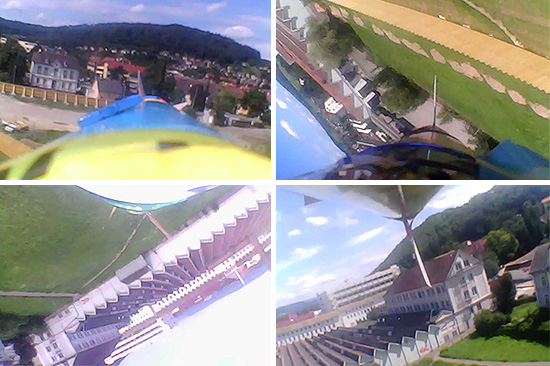 I want to thank Werkraum Schöpflin for hosting the workshop and for helping us during the three sweaty days: for David and Tobi for helping with the workshops and for Vera and colleagues for providing us with fresh drinks, food and a great space to work in! Thanks to Junior Lab for inviting us!