As part of Linz' European Capital of Culture Program, Ars Electronica made an exhibition called 80+1 – A Journey around the World.
Part of this show was “WIA < > WIA”, short for “Water in Austria < > Water in Africa“, an artwork which was made by an African artist, called “Melissa Fatoumata Touré”.

The installation aimed to rise awareness of the different values of water in different areas of the world. 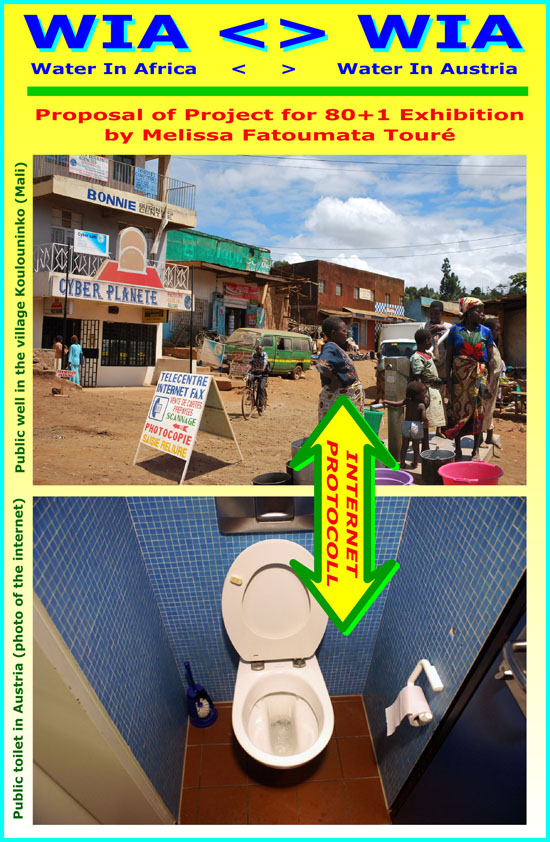 Melissa was played by an actress. The organizers saw her for the first time a few weeks after the exhibition opening. 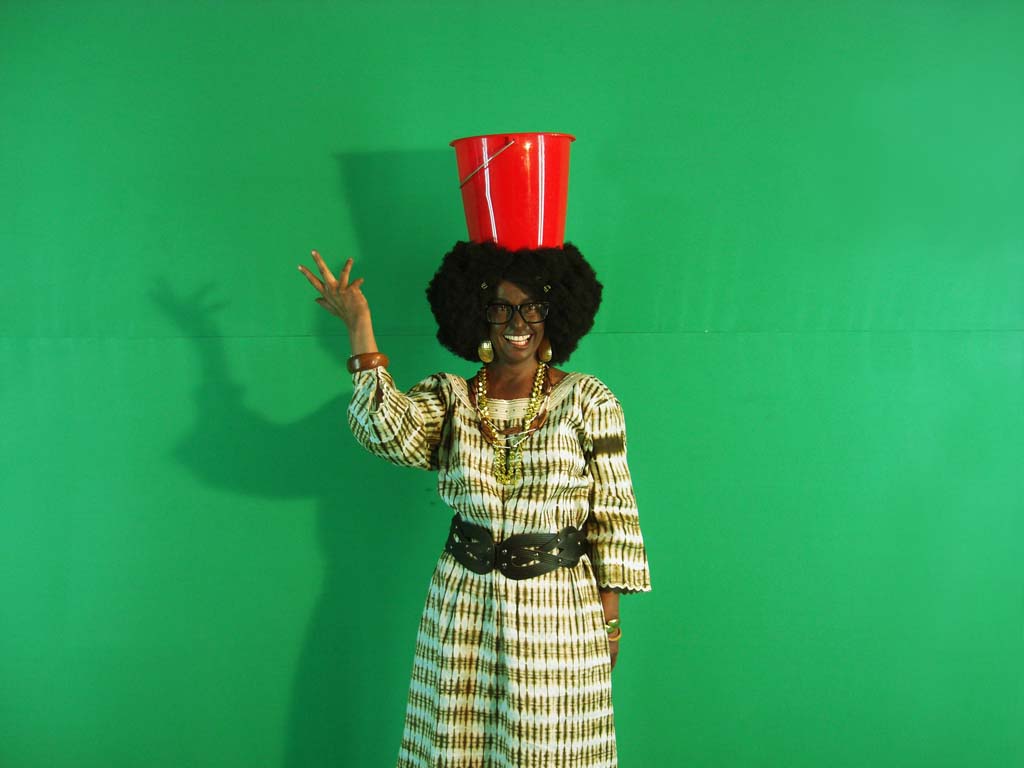 The beginning of the project

In a public call in 2008, Ars Electronica invited artists around the world to submit proposals for a virtual journey around the world, a medial reinterpretation of the trip protagonist Phileas Fogg took in Jules Verne’s novel “Around the World in 80 Days”.

With their call for proposals, Ars Electronica published detailed directions for the desired competition entries. Besides very particular technical descriptions, the organizers announced a variety of key-subjects as well as virtual destinations which they wanted to cover with the submitted works. The organizers focused on important issues that would affect the population of the whole world, like terror, genetic engineering and climate change. Even if I perceived this call for proposals as quite limiting in the means of artistic freedom, I was happy to recognize that “creative hacking [was] encouraged” by Ars Electronica, as they wrote in their open call.

Screenshot of the open call with the proposed themes and locations 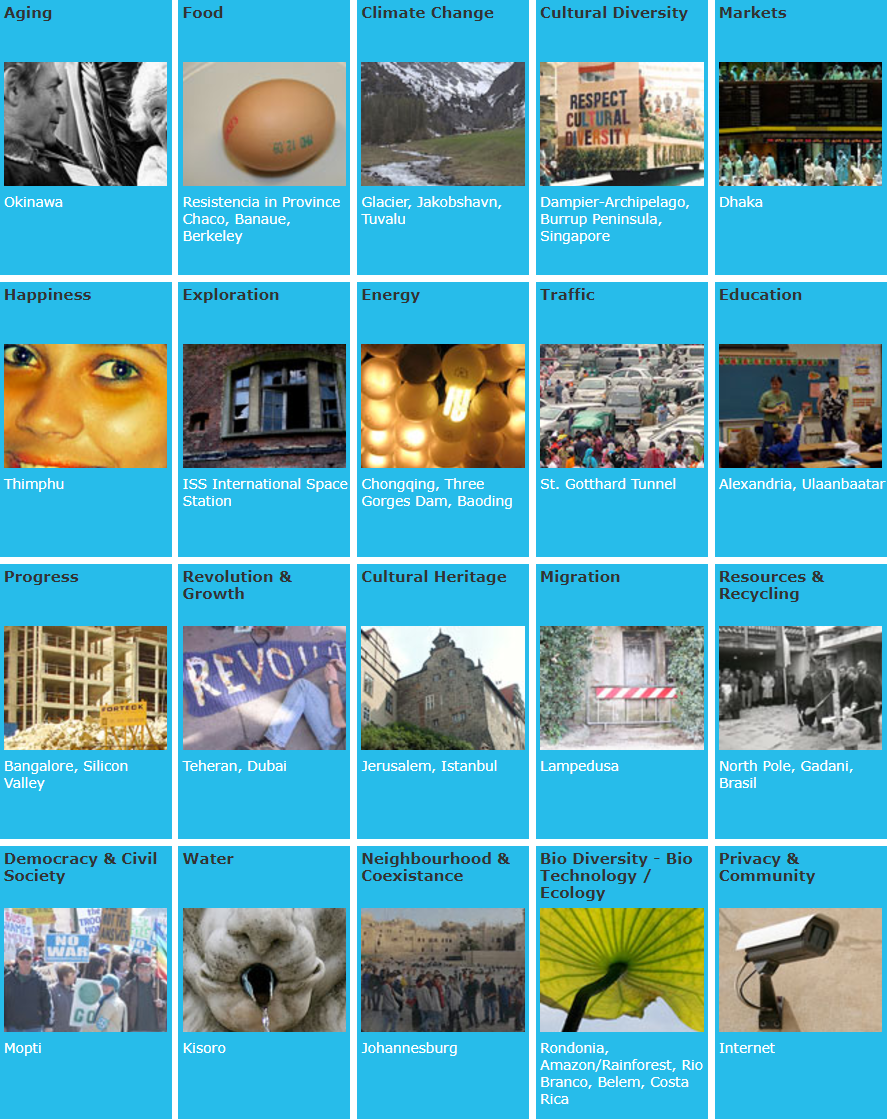 I took the journey’s belletristic basis as an occasion to consider an installation that would be played out in the realm of fiction. Just like the novel that gave the whole project its name. The Internet as the filter in the communication between Ars Electronica and me played an essential role in my project as it helped me to effectively conceal my true identity for more than eight months. Inventing and subsequently maintaining a fictional identity was the core of my artistic contribution to this exhibition.

For the exhibition, I custom-tailored both, the “WIA < > WIA” installation as well as the fictional artist “Melissa Fatoumata Touré”, to the wishes expressed by the project organizers in their call for submissions.

Melissa Fatoumata Touré and her proposal

Melissa was designed as the perfect dream of every new media art curator. With her degree in computer science and her well developed practical electronic skills, she was able to produce even complex technical setups in a professional way. She had an exotic background, but her ideas were distilled media art mainstream.

Being the dream artist persona of every new media art curator, Melissa also had to have an experimental electronic music band. This is the cover of her latest CD “Futurebeat”. 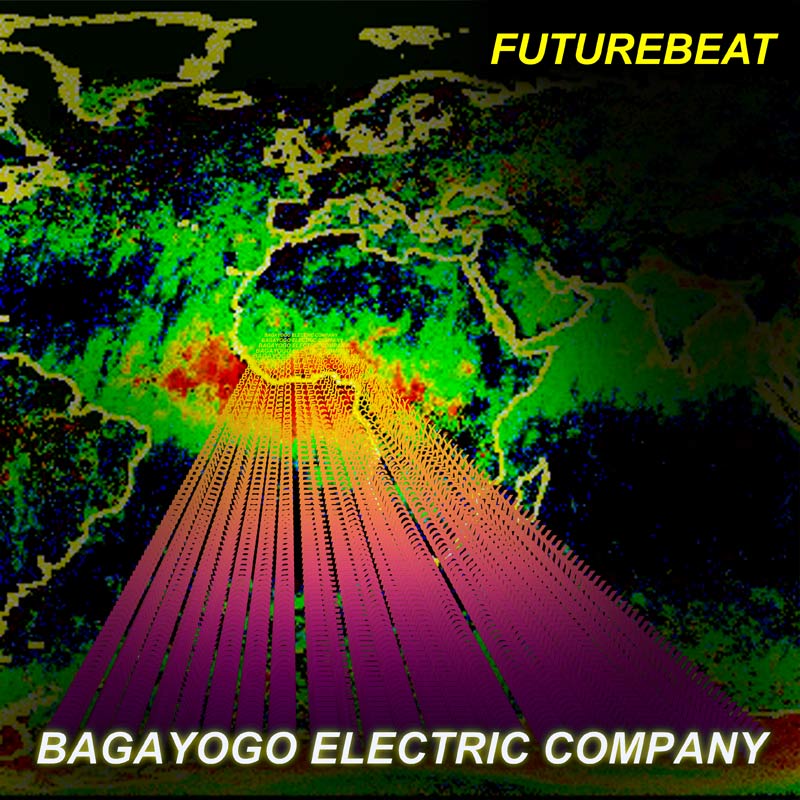 Melissa’s proposed installation “WIA < > WIA“ is a classic piece for its field: It consists of two physical interfaces, one mounted on a public well in Mali and one controlling a public toilet in Linz. Both are connected via the Internet. The installation compares the different value of water in both countries. While Austria has a lot of water – and can even use it to flush excreta down the toilets, Mali is a dry country where clean water is rare and valuable. The core idea of the installation is to provide an Austrian toilet flush in realtime with the same amount of water that is pumped at an African village’s well.

Conceptual drawing that was part of Melissa's project proposal

Since the village has only 200 liters of water per day for disposal (a fictional value which I adjusted to the installation requirements), the exhibition’s toilet runs dry after about twenty toilet flushs. But there’s a feedback loop: With the donation of one Euro, exhibition visitors can buy ten liters of water, which is enough for one toilet flush. The donated money is used to subsidize an African well drilling project. (To avoid confusion at this point: Even if the installation was complete fake, the installation raised real money which was really donated to an actual well drilling project.)

Production of the installation

After the project was selected by the jury in October 2008, the actual installation had to be produced. My approach was to go into full service mode and to try to provide everything that the organizers requested, via email.

In the upcoming months, I kept the organizers up to date about Melissa's advances with building the physical interface in Mali. This happened with photoshopped images, which I emailed. But the exhibition organizers were also very creative, when it came to the details of the exhibition in Austria and the framework program.

In order to realize their ideas, I had to create the following:

The most important part that Melissa had to deliver to the exhibition in Linz was the valve control electronics, though, and I could not send this via email.

The device was meant to interface the toilet with Koulouninko’s well via the Internet. To get the physical board to Linz turned out to be one of the most tricky parts of the project, as I did not have any address in Mali from which I could have sent the device.

At the end, I came up with a weird story of my (Niklas') brother marrying Melissa's sister. That way Melissa could introduce the real me to the project. As Niklas, I sent another functioning electronics board from Berlin to Linz, after Melissa’s original board was “lost in the mail”. This gave me the strange credit in the exhibition “Supported by: Niklas Roy”.

The toilet flush water control board, which was “lost in the mail in Africa”, presented by my neighbor in Berlin 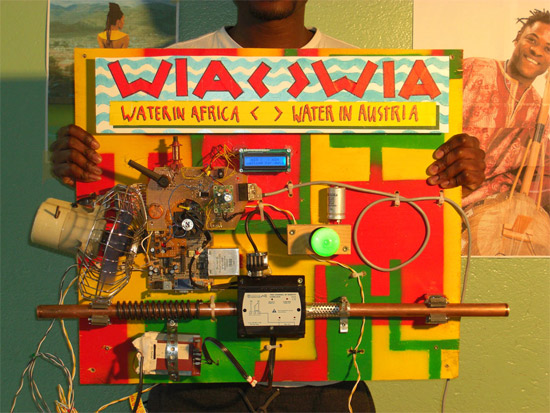 Exhibition of the installation

The exhibition opened on June 17th. The Austrian public television covered the opening in a short feature:

TV report about the opening of the exhibition

This gave me for the first time the opportunity to see how the toilet looks like, remotely from Berlin. A server was sending random data to the toilet in Linz and everything worked well. The exhibition mediators were wondering a little bit, how a village like Koulouninko with its 2000 inhabitants (again, a number I just came up with) can survive with only 200 liters of water per day. But somehow everyone accepted those “facts”.

The toilet in the exhibition space as seen from inside 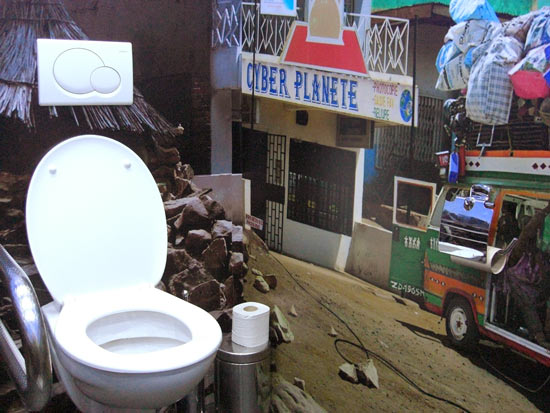 The toilet in the exhibition space, seen from outside with the water reservoir on top

Since the whole exhibition was a highly ambitious project, it did not only showcase the installations. Furthermore, there was a vivid framework program going on. One part of it happened two weeks after the opening: It was a live connection to the Internet café in Koulouninko. Melissa was invited to present her installation via webcam. Afterwards, in a second transmission, Melissa discussed the African water crisis in an expert panel.

Of course, I’m not a woman. And I don’t look like I’d be from Africa. And the Internet café in Koulouninko did not exist at all. So far to the problems, I was confronted with when I received the invitation for the skype-presentation. Now to the solutions:

My workshop turned into a fake African Internet café. 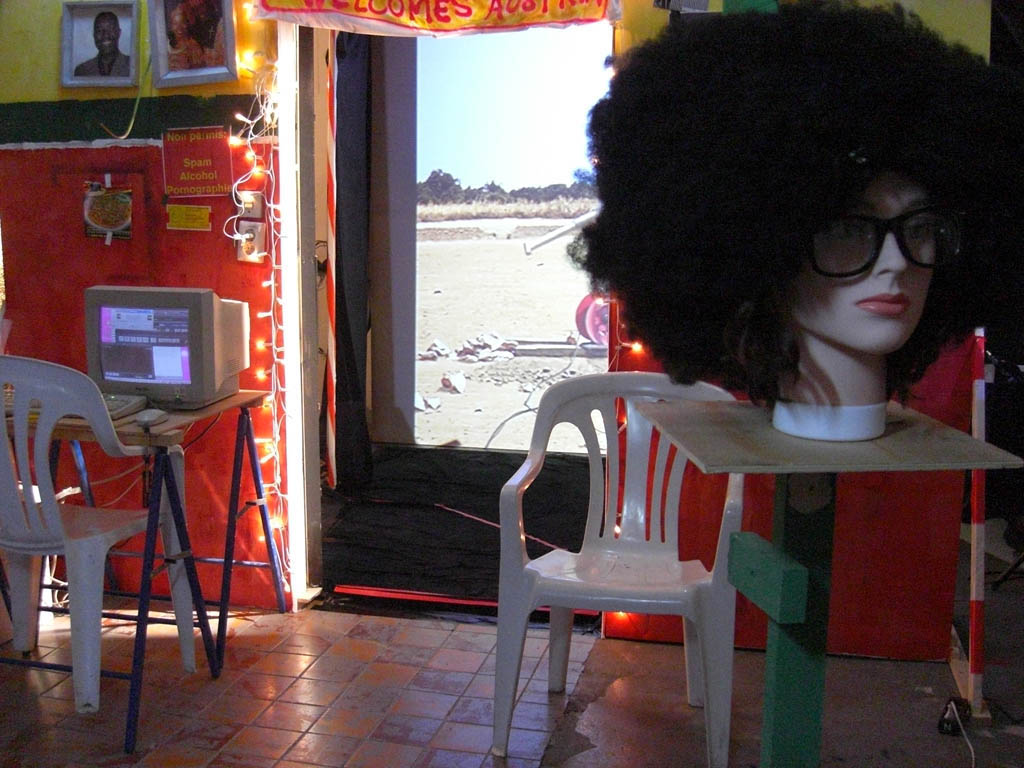 A communication setup that already has proven to work, when the Austrian public radio interviewed me via Skype, was the solution for Melissa’s female voice and appearance. I was sitting in the room next to my studio. On my laptop, there was running Skype. My headphones were connected to the Laptop and I could see and hear what was going on in Austria. My voice was transmitted via microphone to the studio, where the Melissa actress could hear just me. She was repeating word by word what I said and her voice and image went back into my laptop, being sent to the exhibition in Linz. And well, Melissa’s skin color was achieved with a thick layer of makeup. The image that the organizers and exhibition visitors in Linz received, was on the borderline of believability. But still, Melissa was treated as if she'd be taken serious.

Me, giving a radio interview as “Melissa”

This all changed a bit, when the discussion became longer and longer. There was a certain point, where it should have became night in Africa, but the sky of the beautiful Koulouninko village was obviously still bright blue, as everyone could see through the Internet cafe's open door.

Production of the rear projected video that could be seen through the Internet café's door. The sky in the video was always bright blue.

Revelation of the hoax

At this point, Ars Electronica started to doubt. They tried to explore the true background of the work that they presented already for quite a while. And since Melissa refused to simply reveal her real identity, this investigations were mainly a brute force research. By browsing thousands of photos in the Internet, Ars Electronica’s director Gerfried Stocker found all the images, that I used to compose the virtual Koulouninko. And even if I thought that the organizers must have known who the real person behind Melissa was (probably the “brother of her sister’s husband”?), they couldn’t believe that it would be me. For them, this kind of action seemed to be too bold. After two more weeks of emailing as Melissa, I decided to stop hiding and I revealed my true identity.

Some of the source photos which I used to create the virtual Koulouninko.

The installation was still running very successful until the end of the exhibition. It raised 1470 Euros which were finally donated to a real well drilling project.

Ars Electronica reacted very positive on the fake – they invited me to present the project at their festival in September. And even if the exhibition mediators were advised to explain the audience the fictional character of the installation, no visitor really wanted to hear that. The audience mostly preferred to believe Melissa’s [fake] version. Even “Der Standard”, a well recognized newspaper from Vienna reported during the Ars Electronica festival about the project as if it were true. Months after the fake was revealed. It seems that some people rather prefer to believe a hoax than the more complex truth.

Detail of the exhibition setup

I want to thank Ars Electronic for taking it easy :)
And I want to thank all the people who helped me with this project, but didn't want to be mentioned with their names, because of the questionable nature of the undertaking.